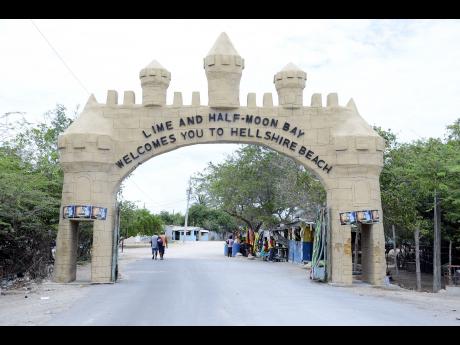 The entrance to the Hellshire Fishing Beach, where hundreds of Jamaicans and visitors to the island enjoy a regular swim. 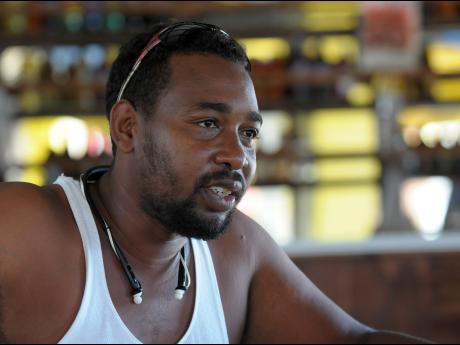 Christopher Brown, who chairs the Half Moon Bay Fishermen's Co-operative, in the restaraunt which he operates. 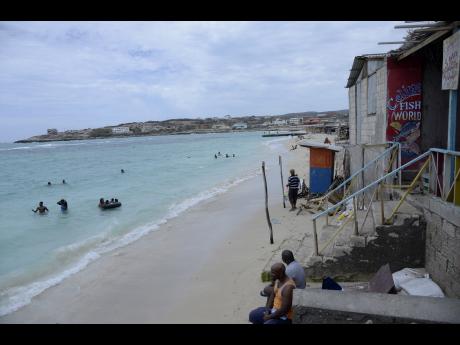 The sea lapping almost at the boor steps of these businesses on the Hellshire Fishing Beach.
1
2
3

Forty years ago, there were five little restaurants or fish shops situated about 100 feet or more from the shoreline at the Hellshire Fishing Beach in St Catherine. Today, there are more than 48 such businesses and the sea is now right at their doorsteps.

Several of these businesses had moved further away from the sea at least five times over the years to escape imminent danger, but with daily changes in the ecosystem, they never seem to move far enough. Now the business owners are in a desperate bid to tame the sea, which threatens to take back the livelihood it was instrumental in creating for them.

Christopher Brown, who chairs the Half Moon Bay Fishermen's Co-operative that represents several of the fishermen-turned-restaurant operators, is optimistic despite the systematic beachfront by the sea.

He says a 2012 study commissioned by the group, which was funded to the tune of $6 million by telecoms company LIME, has found that there is a way to curtail the tempestuous waters, but they would need more than US$1.5 million (J$176 million) to stop the erosion.

According to the study, which was undertaken by a coastal engineering company, they would first need to undertake a breakwater project, similar to what is being considered in Negril.

Brown said he and other members of the cooperative were pushed into action once the study was completed, and now that they have satisfied all the requirements to operate as a cooperative, they are working with the Jamaica Business Development Corporation to write grant proposals and solicit financiers.

The businessman feels that everyone stands to lose with the rapid erosion of the beach, which he described as a national treasure and a big crowd-puller.

"It's not [officially] a bathing beach, but it's Jamaica's number one bathing beach. There is no other beach in Jamaica that carries the crowd that we carry," insisted Brown.

"It's a fishing village; however, in terms of the diversification and sustainability of our earnings as fisherfolk, when [the] weather is bad, this is what we have to do," said Brown in reference to the proliferation of small businesses along the beach over the years, where a variety of seafood dishes and liquor are never in short order.

"We are going to have to take measures and steps to secure our livelihood, because at the end of the day, we are not going to sit by," he said.

These measures include evacuating scores of families who have been setting up small shacks near the coast. At last count, there were 93 such zinc and board structures, but with the assistance of the mayor of Portmore, the councillor for the area, and the police, they have been making strides in reducing the numbers.

"What we don't want is to develop a community in the area and then it creates a problem when it's time to develop. In terms of development, we are lacking toilet facilities and parking. We need these things and we need more areas for beatification," said Brown.

The businessman said the National Environment and Planning Agency has already granted them a permit to begin the process of reclaiming some of the land that has been eroded. They have also approached several companies to finance the project and are hoping to implement a series of fundraising initiatives as a group, if given the requisite approvals.

"What we would do to offset this is like say we need $1 million and we have 12 holidays in the year. What we would do is break that over the 12 holidays and close the gate and ask who use the beach for a contribution of about $50 or $100, and we use those funds," he said.

Brown said the Urban Development Corporation, which gave them 10 acres of land in 2001, has pledged to assist in their efforts to save the beach. However, he is a bit perturbed that they were overlooked by the tourism ministry, which is now in the process of upgrading 14 beaches across the island.