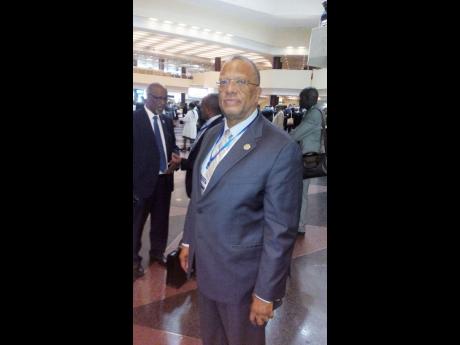 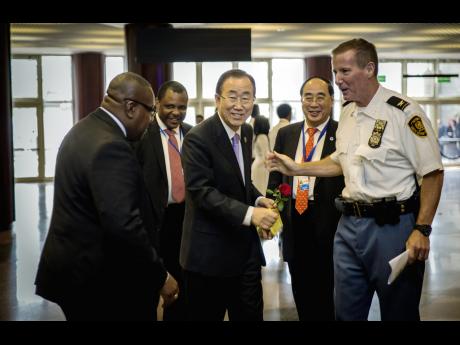 Every delegate, despite size of home country or otherwise, who took the podium at the Third International Conference on Financing for Development in Addis Ababa, Ethiopia, last week, made a powerful case for a reasonable chunk of development support for their homeland.

Issues of too heavy debt burden, climate change and other vulnerabilities, size and responsibilities, or the lack thereof, the absence of capabilities and expertise were all presented as hard evidence of the urgent need for global help to achieve the new 30-point post-2015 development goals to be agreed in September.

Said Jamaica's finance minister, Dr Peter Phillips: "The undeniable realities of globalisation is that we are all affected, albeit by varying degrees, by developments which take place beyond our borders. The 2008 global economic meltdown had an impact on all of us, with disastrous consequences for some.

"A country like Jamaica, small in size and population, heavily dependent on trade, and with an economy already overly burdened by demands on a limited resource base and closely tied to the fortunes of larger economies in the region, was severely dislocated and is today still feeling the effects of the global recession."

If the mission of the delegates of small islands and development states in Addis Ababa last week was to reset the United Nations' agenda, if not the list of goals, and to ensure that their national issues made it to the top of the discussion points, then they overachieved in this regard.

When all was said and done, and said again, the worries and concerns of the developing nations reverberated from nearly all platforms.

Calls for help with debt, assistance to get just due from foreign investors, and special consideration for the debilitating circumstances were made from plenary platforms, in side events, bilateral and multilateral sittings.

"On account of the high levels of public debt, approximately half of the CARICOM states are either in negotiations or have just concluded IMF adjustment programmes,' noted Phillips, as he carried the CARICOM message.

The Caribbean, though the beneficiary of much recent attention from China, is made more vulnerable under the heavy debt burden it carries. Paying out the majority of collections to others we owe leave little or nothing to sustain or develop anything at home.

According to (Economic Com-mission of Latin America and the Caribbean) ECLAC, the English-speaking Caribbean countries have debt-to-GDP ratios which exceed 50 per cent. In fact,

several, including Jamaica, have debt-to-GDP ratios in excess of 100 per cent.

Phillips said the Caribbean with all the challenges is now the most highly indebted sub-region of the world, and "... today we are at the risk of being overwhelmed by any unanticipated negative effects of events occurring in the wider global economy".

"We also have to recognise that many of our countries will not be able to achieve and meet sustainable development goals if the issues of the debt overhang is not addressed," said Phillips.

For the CARICOM states, the help needed is more than what's available from the general menu. Urgent attention must be given to the huge debt overhang. Note must be made of the fact that our physical location - blessed with sun, sea, sand and quick reach to greener pastures - is in quite a predicament when nations are finan-cially challenged and nature turns against them, threatening when hurricanes occur be-tween June and November, and in recent years, December through September when severe drought strikes.

It was reported that during the period 1994 to 2014, approximately US$30 billion of the budgets of Caribbean nations was devoted to reconstruction efforts necessitated by occurrences of natural disaster.

However, sitting in the backyard of the United States and on the doorsteps of many Latin American neighbours, the region could be poised for unprecedented levels of growth, some believe, if it plays its cards well. The trouble is first to agree on the cards and exactly who will play them, and when they will be played.

It was widely agreed that foreign direct investment is crawling in, and could break into a full Usain Bolt sprint in years to come. However, no one dared to predict exactly how many years to come. It was also not clearly understood if the investors, who are expected to come to the region, will be willing to pay their full and proper share of taxes on arrival, or if their aim will only be to take with them every red cent of their profit on departure.

Angel Gurria, secretary general of the Organisation for Economic Cooperation and Development, pointed out that developing countries need to invest in infrastructure and human resources, and tax avoidance by multinational corporations makes this difficult.

Gurria emphasised that every effort must be made to support the establishment of a global code of conduct to ensure good behaviour from multinationals who seek to invest in these vulnerable states.

"The United Nations has a role in determining the rules of the game," said Gurria.

The concern raised by several developing countries, including our own, spoke to the moral issues and matters of corporate social responsibility.

Countries such as Canada are a thousand steps ahead of the game, as they have put in stringent mechanisms to ensure that corporations that venture into other countries in their name do so under laws that demand good, proper and decent behaviour.

Based on the arguments at the conference, if CARICOM has its way, when global sustainable programmes are rolled out over the next decade, somewhere in the mix will be a level of debt relief, some technical support to deal with rogue international corporations that refuse to comply with local tax laws, and certainly some real help with infrastructure and other forms of development, at the least.