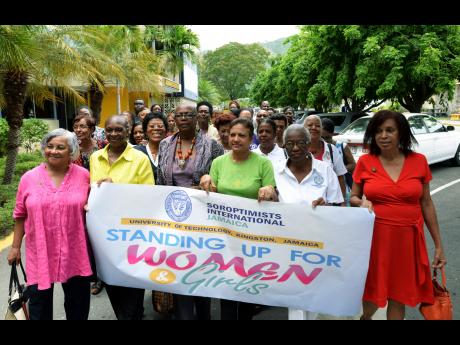 Jermaine Barnaby
Members of the Soroptimist International Jamaica march yesterday with a banner before that start of a public forum dubbed 'The Many Faces of Violence Against Women & Girls'. 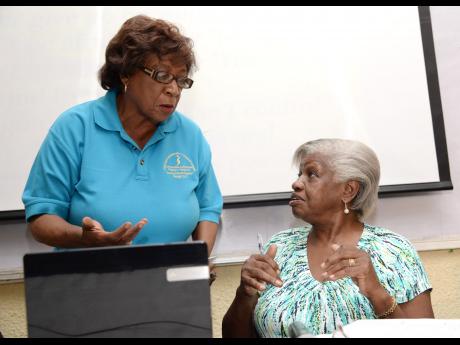 Whether it's called intimate partner abuse or domestic abuse, verbal or non-verbal acts of intimidation perpetrated on women by their partners is still abuse, and statistics show the most vulnerable in such situations are pregnant women and those who opt to leave.

Either way, the situation continues to be worrisome in Jamaica and is prevalent among all socio-economic groups, according to Joyce Hewitt, international consultant and women's activist.

Hewitt was one of the presenters yesterday at a forum titled 'The Many Faces of Violence Against Women and Girls', put on by Soroptimist International Jamaica and held at the University of Technology.

She argued that to minimise the abuse of Jamaican women in the future, the country must save its boys.

According to Hewitt, boys who were abused in the homes and bullied at school grow up to continue the cycle of abuse, while girls who were emotionally, physically or sexually abused, including by relatives, sometimes grow up expecting to be abused.

"The only thing that distinguishes one form of abuse from the other is the choice of weapon. And anyone can be a victim of intimate partner abuse. It does not matter what your circumstances are, you can be an abuser," said Hewitt.

She said, like marriages, abuse has its own honeymoon period, in which it thrives upon the fears as well as the introduction of its own intimidatory tactics.

Hewitt argued that after germination, the abuse begins to manifest itself and the physical stage usually begins with pushing, punching, slapping, kicking, throwing objects, choking, using weapons or acid, which often ends in the death of the abused.

The women's rights activist said emotional abuse has symptoms such as name-calling, clinging, yelling, debasing, humiliating, ignoring and isolating, which typically ends in depression and sometimes suicide by the victim.

Hewitt said while abuse sticks to no specific script and is likely to include physical and emotional elements, recognition of the problem was most important and seeking help.

Help, she said, must be more than "prayer meeting by church sisters", or a policeman advising a victim to "cook him a nice dinner tonight", or "go home and sex him and he will feel better".

"Prayer meetings can't cure domestic abuse ... . Oftentimes the abuser has a public face and a private face. We also find that some schools girls do not want their guidance counsellors to know about the abuse," she said, lamenting the need for trust in order for victims to seek help.

Hewitt said added to the faces of abuse are the unwanted touching, sexual name-calling, accusations of unfaithfulness and other false accusations, followed by threats with words, action, reckless behaviour, or attacks on pets that are close to the partner, designed to cause women to be fearful.

"Work with boys on the issue of domestic abuse. Boys are conditioned and socialised to abuse," said Hewitt in a plea to the nation.