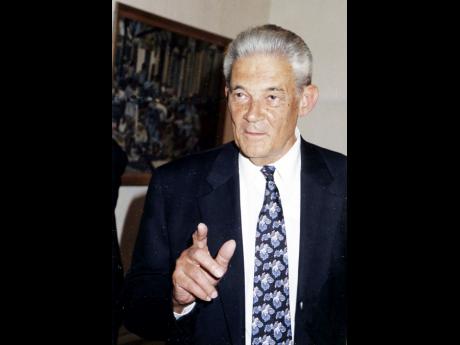 Arthur, who was a guest at a Gleaner Editors' Forum last week, said he has paid careful attention to Manley's thoughts and opinions in at least one book edited by late former University of the West Indies vice-chancellor, Professor Rex Nettleford.

For Arthur, Manley changed Jamaica through advocacy, and it is his view that the region did not need a cabal of leaders, but those who could advocate.

"I believed in Michael, when he was here, that he could change Jamaica by the power of advocacy. I have told people that the Michael Manley I see represented in the exchange of letters with Kari Levitt is the most remarkable politician in the history of the Caribbean ...," he said, responding to a question from reporters.

According to Arthur, "one thing politicians cannot easily do is acknowledge political mistakes", but Michael Manley stood out and was a "big man" in his view.

"And Michael Manley will go down as the person who tried to carry Jamaica in one direction, representing that he had made some fundamental mistakes and was big enough to say so," he said, referring to Manley's shift from a democratic socialism doctrine of the 1970s to liberalisation of the Jamaica economy in the early '90s.

"It takes a whole lot of man to do that, especially if you live as a politician, out in the full glare of public life," Arthur said of the man revered in the ruling People's National Party (PNP) and who served as prime minister twice in Jamaica.

While the late former prime minister may still be respected by Arthur and others, Manley had a turbulent political career in Jamaica. He made local and international political enemies when in 1976 he declared Jamaica a democratic socialist state.

With rhetoric at a crescendo between the PNP and the Edward Seaga-led Jamaica Labour Party (JLP) in the late 1970s, paralysing political fear spread, leading to massive capital flight and rapid brain drain which has continued to date.

It was widely believed, and documents unsealed in the United States have supported the claim, that there was external involvement in the country leading up to the 1980 general election.

For Arthur, however, "advocacy is what changes things, if you do it well".

He said Manley, who died in 1997 after a long illness, was an advocate and did it well.