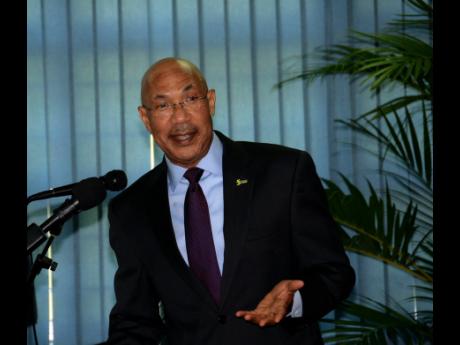 Governor General Sir Patrick Allen has denounced the increase in violent crimes, including last week's murder of two police officers in Denham Town, Kingston, and has called on citizens to play their part in curbing criminality across the country.

"As a country, we regret the loss of lives to violence and mishaps, but when the protectors of the peace are being attacked, we all must be concerned and help to combat such attacks," Sir Patrick said in his address at the annual Governor General's Achievement Awards, held at the Sean Lavery Faith Hall in Westmoreland on Thursday.

"We must remember our members of the security forces who have been killed in the line of duty, including the most recent victims, Constables Crystal Thomas and Lynden Barrett from the Denham Town Police Station," Sir Patrick said. "All of us gathered at this awards ceremony grieve with the bereaved families, to whom we extend our deepest condolences."

Constable Crystal Thomas was shot and killed by gunmen on Tuesday, July 14, while she was making her way home from work on board a public-passenger bus, and Constable Lynden Barrett was shot dead by assailants while walking along Wellington Street in west Kingston on Tuesday, July 21.

Sir Patrick declared that all Jamaicans must help curb negative activities, including the lottery scam, that help create a culture of criminality.

"We must get rid of the vices, including the lottery scamming, which has ruined our international reputation and has destroyed several homes and lives," said the governor general. "Ever so often, I get letters from retirees in the United States of America asking me to help them to find these people who are scamming them. Of course, I send them over to the commissioner of police, who is better able to handle those things."

Sir Patrick continued: "We must ensure that gangs are disbanded, and the trafficking

in guns and drugs must be eradicated. We have to end the culture of silence and instead cooperate with the security forces. Together, we can build a strong nation as we reverence the sanctity of life and restore hope and confidence in Jamaica, land we love."

The Governor General's Achievement Awards ceremony, which was held this year under the theme 'Values through Volunteerism: Impacting Com-munities One Community at a Time', saw 13 individuals from the county of Cornwall being awarded for their contributions to nation-building.