"All I can say is that it is a disaster. Losses should run into millions upon millions of dollars," said Kerold Clarke, president of the Old Shoes Market Vendors' Association. "I know one vendor who has lost over $5 million worth of goods."

According to Clarke, his own investigations revealed that the fire, which started in the 200-shop facility shortly after 3 a.m., was caused by a candle, which was left unattended by a vendor who had fallen asleep in his shop. 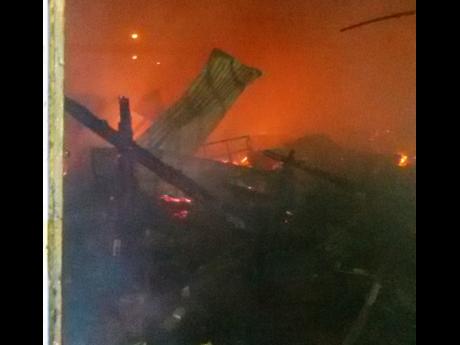 "Luckily for him (the vendor), he managed to get out without suffering any injuries; however, his shop and all the contents were also destroyed," stated Clarke.

For nail technician Maxine Smith, it was a case of total devastation. According to her, her shop, which was her only source of income, was totally gutted.

"I lost over a quarter million dollars in equipment and stock - styling chair, shampoo basins, dryers, curling iron, you name it. Even a refrigerator," said Smith. "As a single mother with two children to take care of, this is the kind of setback that I could well do without."

While obviously distraught over the significant losses suffered by the vendors, Clarke was full of praise for the St James Fire Department and the police, who were early on the scene and took charge of the situation quickly.

"Had the fire people and the police not responded promptly, it would have been total disaster. The entire place would have been flattened," said Clarke. "The firemen were able to quickly contain the fire, preventing it from spreading to the unaffected shops while the police kept onlookers away to prevent looting."

Yesterday's fire was the second major fire at the Old Shoes Market facility in just over six years. In June, 2008, a massive blaze destroyed 25 shops, resulting in an estimated $50 million in damage.