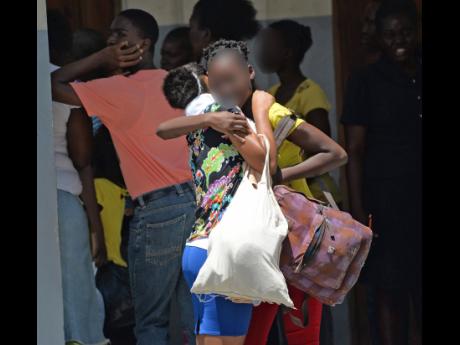 Jermaine Barnaby
Two of the four Yallahs High School girls hug excitedly outside the Family Court in Yallahs, St Thomas, last Thursday, after a judge ruled that they should be released from the remand centre and reunite with their parents. 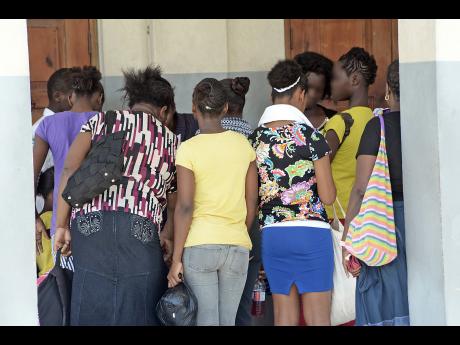 Jermaine Barnaby
The four schoolgirl bullies from the Yallahs High School and their parents outside the Family Court in Yallahs, St Thomas, after they were ordered to attend mediation sessions last Thursday.
1
2

After spending two weeks at the South Camp Road Juvenile Remand & Correctional Centre, the four female students of the Yallahs High School who had battered a 13-year-old male classmate were released into the care of their parents when they appeared in court last Thursday.

The court has ordered that the schoolgirls, who were charged with assault occasioning bodily harm, along with their parents or guardians, and with the boy and his parents, should engage in mediation to see if an amicable settlement can be reached before they reappear in court on October 5.

According to Sunday Gleaner sources, the parents of the four girls were upset that their children had been ordered remanded when they had previously appeared in court, but last Thursday the presiding judge argued that based on the time in custody the parents would be getting back better children.

The sources say the judge told the girls that she will be keeping track of them, as their behaviour - which was brought to public attention by The Sunday Gleaner on June 28 and later made it on to YouTube - was disgraceful.

The judge reportedly told the girls that although her heart is tender towards them she had to be tough when it was necessary.

In court, the four girls were each asked to say something to the boy they abused, and three produced letters of apology which they read aloud, while the other apologised without a script and acknowledged that what she had done was wrong.

The boy told the court that he accepted the apologies from the girls.

The girls, who have all been appointed the same probation officer, were then told that when school reopens they should treat the young boy as a little brother, as he is smaller than all of them and they should protect him.

In referring the parties to mediation, the judge reportedly warned the girls' parents and guardians to ensure that the matter is resolved or they will need to seek lawyers to defend their children when they return to court in four months' time.

The judge is also said to have told the boy's parents that if they desire compensation for their child's medical expenses and other cost incurred as a result of the incident, they should ensure that this is dealt with during the mediation process.

The boy's stepmother, Patrice Sinclair, told The Sunday Gleaner that they have already spent in excess of $25,000 on medical expenses, and will be required to spend more.

"He is still feeling pain and some of the time he sits down and look out of space," said Sinclair.

The mother of one of the girls expressed deep regret that her daughter was involved in beating up on the little boy.

"I said to her that she is wrong; she should never, ever ... try to gang the

little boy. When mi look at the little boy mi say is really that little boy four of them a look to fight? It is not good at all."

According to the mother, she is happy that the girls have been taught a lesson, and if her daughter does not behave herself going forward, she will take her back to court to be sent back to the juvenile correctional centre.

"I tell her already, anytime she miss she going back down there, because mi not keeping any pickney who mi can't talk to," said the mother, as her daughter shouted, "I don't want to go back there."

The boy, who is getting counselling from the Victim Support Unit, had previously expressed a desire not to re-attend the school out of fear of being ridiculed, but his father has since persuaded him to change his mind.

"I have spoken to him and I have told him 'don't let them get that victory over you', so he will be going back," said Trevor Sinclair.

His mother, Claudette Henry, is however not comfortable with the decision to send him back, as she believes the girls can "apologise to him and don't mean it. So we still have to watch him when he goes back to school."