No gay parade ... but LGBT to stage pride events during Emancipendence week 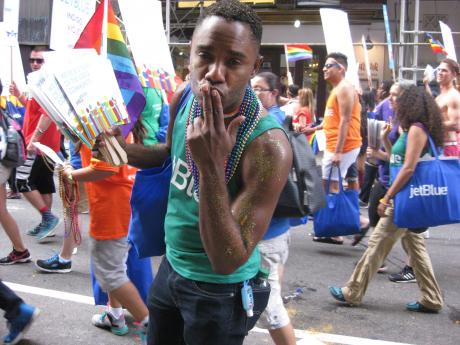 File
A reveller at a gay pride parade in New York City.

The Lesbian, gay, bisexual, transgender (LGBT) community has said all is in place for its Pride 2015 celebrations, the first of its kind in Jamaica, which coincides with the week of Emancipation and Independence celebrations from August 1 to 5.

Latoya Nugent, associate director at the Jamaica Forum of Lesbians, All-Sexuals and Gays (J-FLAG), said there would be no parade.

"This is partly because of security concerns and our belief that a parade is not the only way we can celebrate our pride and freedom as LGBT Jamaicans," she said.

Nugent also said the inaugural event was not motivated or influenced by the decision of the Supreme Court a few weeks ago to legalise same-sex marriage throughout the United States.

Nugent said Pride Jamaica 2015 was conceptualised last year out of the realisation that "LGBT Jamaicans are eager and willing to support activities that acknowledge and celebrate our existence and cement our place as part of the Jamaican citizenry.

"We will pause the negative vibrations from anti-gay lobby groups and focus on the strides we have made as a community. More importantly, we will recommit to initiatives that see us moving forward as one community regardless of our demographic and without initiative," she said.

The LGBT community has used 'pride' as the signature for its events. Pride in London, for example, is the city's biggest one-day event, and one of the world's biggest LGBT celebrations.

Nugent told The Gleaner that the local celebrations are aimed at increasing the visibility of the Jamaican LGBT community in what the organisation considers to be safe spaces.

She said the week will be packed with activities to allow members of the community to formally acknowledge some of the hard-working and committed community members and allies who have helped to keep the torch ablaze.

"I believe together we can and we will demonstrate to all of Jamaica and the world, in the spirit of this year's Independence theme, that we are proud and free Jamaicans breaking the rules of oppression," she added.

The events, she said, include a flash mob on Emancipation Day; a flag-raising opening ceremony; an open mic event, which will feature the creative arts talent within the LGBT and ally community; and an art exhibition.

Nugent revealed that the celebrations will also feature a 'coming out' symposium, where members of the LGBT community will share their experiences of living openly in Jamaica as single persons and as persons in committed relationships.

"The symposium will also feature allies, who will share their experiences of what it is like to publicly support the LGBT community in Jamaica, as well as an acoustic concert for women and a pride party," said Nugent.

Nugent disclosed that during the period August 1-8, several business entities, including restaurants and bars that are considered LGBT friendly, will offer discounts to patrons via a special promo code.

"The idea is to support businesses that have been kind to the LGBT community and are considered safe spaces for LGBT people to do business," said Nugent.