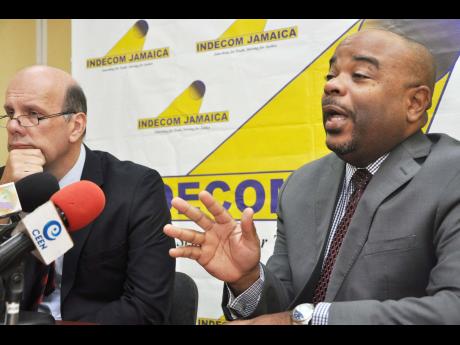 COMMISSIONER OF the Independent Commission of Investigations (INDECOM) Terrence Williams was yesterday sworn in as head of the security forces' oversight body for another five years.

Williams, who was sworn in by Governor General Sir Patrick Allen, said he was honoured and grateful to be given the chance to continue the important task on behalf of the country.

"Leading the men and women of INDECOM has been the most significant undertaking of my professional life," Williams confessed.

The INDECOM boss made it clear that his organisation is the partner of "the good policeman, the good soldier, the good correctional officer, not their adversary".

"It is important to emphasise this truth in the face of arguments that a police officer conscientiously performing his or her lawful duties should now be hobbled by anxiety because of the prospect of our investigations," he added.

get to the truth

According to Williams, his investigators are not 'out to get' anyone but are working to get to the truth. He said that INDECOM has exonerated many agents of the State, noting that a police officer, soldier or correctional officer who follows his training and obeys stipulated policies has nothing to fear. "The law does not seek to penalise honest errors in judgment."

Since INDECOM was established in 2010, the commission has received three convictions in the courts involving a total of 10 police personnel.