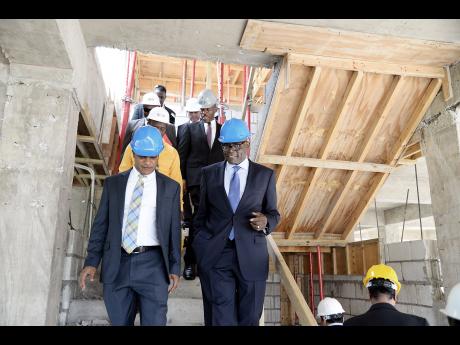 Jermaine Barnaby
National Security Minister Peter Bunting (left) and Brian George (right), president and CEO, Supreme Ventures, are joined by others on a tour of the Jamaica Constabulary Force’s Special Building Project, following Supreme Ventures’ $5-million contribution towards the project at the Office of the Commissioner of Police, 103 Old Hope Road, yesterday.

THE ST Andrew headquarters of the Jamaica Constabulary Force (JCF) is being held together by termites, Police Commissioner Dr Carl Williams quipped yesterday.

"Some might think it's a joke, but it's not. If you go there, you will see the termites ... you will see them in plain view holding hands to hold that building up," Williams said, to laughter, of his Old Hope Road offices.

National Security Minister Peter Bunting also joined in, sharing "a rumour" that directives had been given that the exterminators should not be called in.

"Because it was the 'chi chi' alone that was holding up the building [police headquarters] over there and anyhow their efforts were interfered with, the whole building would come down," Bunting also said to laughter.

The minister and the police chief were using those light moments to illustrate the condition of the nation's police headquarters, which, according to Williams, has been condemned by the local health authorities since 1980.

"The buildings are old, but we still had to slug it out there with the termites," Williams continued.

According to Williams, the JCF headquarters was relocated from East Queen Street in downtown Kingston to its current location in 1967.

The commissioner was speaking after he accepted a $5-million donation from the gaming company Supreme Ventures Limited to help with the construction of a new police headquarters, which began in January on lands adjacent to the head office and which is expected to be completed later this year.

save the gov't millions

When completed, he said the 14,000 square feet of new office space would save the Government and taxpayers millions of dollars in rental costs.

"We will not be paying in the future, the kind of money that we are paying now for rental of office space," he explained.

So far, he said $24 million has been spent on the project - which is being undertaken mainly by the JCF's Property Services Unit - and that a further $60 million will be required to complete it.

"We started with faith. Based on how urgent this project had to be undertaken we decided that we could not wait around for the capital expenditure from the Budget," he said.

Williams is urging other private sector companies to come forward and assist the project, arguing that it was part of the wide plan to "professionalise" the JCF.

"It's a community project and we are still waiting on others in the community to come on board," he pleaded.

The crime chief sought to dispel the notion that the project was aimed at making high-ranking members of the JCF more comfortable while the rank and file policemen and women continued to operate in dilapidated buildings.

Instead, he said it was part of a wider plan to improve working conditions at police stations islandwide.

Williams acknowledged that not every station would be tackled immediately but said that through a programme being undertaken by the national security ministry, several police facilities, including the Remand Centre as well as the Port Royal, Denham Town, Greater Portmore (Hundred Man), Spanish Town, and Negril police stations are to be upgraded.

"So we are not just looking after the ranking officers at headquarters. We are also looking at the conditions of men and women across the country working in difficult communities," he underscored.