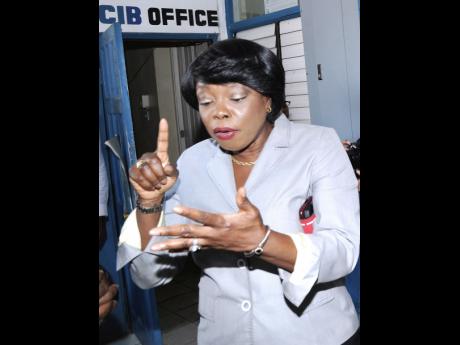 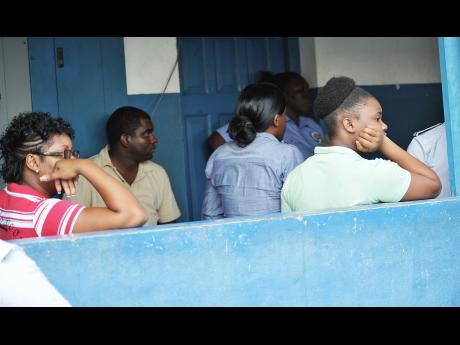 File
Police in a sombre mood at the Denham Town Police Station, recently, after one of their colleagues was shot and killed by gunmen on a bus.
1
2

AMID THE anguish, grief and despair caused by the tragic loss of five of their colleagues, all within a one-month period, crime fighters have vowed that there is no place for retreat or surrender.

"In the midst of the pain and sorrow, we will continue to do what we are sworn to do," Deputy Commissioner Novelette Grant insisted yesterday.

Before the crime fighters could recover from the death of four of their colleagues up to a week ago, they were jolted by news on Tuesday that the life of yet another member of the Jamaica Constabulary Force (JCF) had been cut short.

Corporal Tyrone Thompson, who was assigned to the Four Paths Police Station in Clarendon, became the fifth JCF member in relatively quick succession to lose his life.

Assistant Commissioner Ealan Powell, who heads the JCF Criminal Investigations Branch, revealed yesterday that Thompson's death is being treated as a suspected suicide.

Grant, who is in charge of administration, said the police high command is fully aware of the economic and other challenges facing the men and women of the JCF, as well as the dangers they face in carrying out their duties, and appealed to them to avail themselves of the support systems that are available within the force.

"We do know that this job, by itself, is high-risk and high-stress and the police are humans like anybody else. Many of them have to work long hours and be away from their core support, which is their families, and we are aware that those are factors that impact on them," she reasoned.

"In these moments of grief and distress, please reach out to each other and please use the support systems," she pleaded.

According to police statistics, 224 suicides were reported in Jamaica between 2008 and 2013 - four of which involved members of the JCF.

The figures have triggered a call from one suicidologist for Jamaicans to begin paying greater attention to some of the signs that someone may be suicidal.

Some of these signs, according to Dr Donovan Thomas, author of the book Confronting Suicide: Helping Teens at Risk, are stress, negative emotions, unusual eruptions, as well as expressions of hopelessness, helplessness and worthlessness.

"They may indicate vulnerabilities to suicide," he posited yesterday.

Thomas said in instances where suicidal tendencies are detected there are some things that should not be attempted.

"Do not get trapped into secrecy, if you suspect that someone is suicidal, don't keep it a secret. We should not say 'go ahead and try', do not ignore suicidal threats," he underscored.

But Grant sought to underscore that there are several structures within the JCF to help policemen and women of all ranks, to deal with personal issues, whether or not they are job-related. She said in addition to a Chaplaincy Unit, the JCF has a medical services branch staffed with trained professionals to deal with emotional distress, among other things.

"There is always an avenue that is open to members. All we need to do is remind and encourage them to use it," she reasoned.

Constable Rage Bennett was the first of the five police personnel to die tragically this month. Bennett, who was assigned to the St Catherine North Police Division, was killed by a hit-and-run driver in Clarendon on July 5.

A week later Constable Curtis Lewis, who was assigned to the Westmoreland Police, succumbed to injuries hours after he was hit by a motorcyclist while conducting traffic duties in the parish.

In separate incidents over the following two weeks, constables Crystal Thomas and Lynden Barrett, who were assigned to the Denham Town Police Station, in west Kingston, were shot and killed by gunmen.