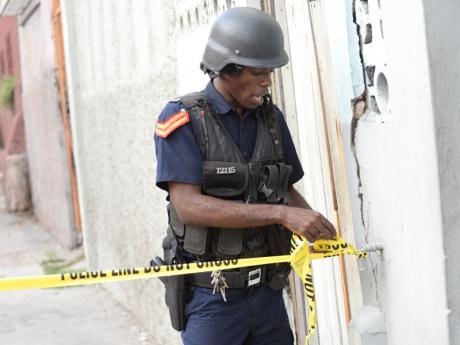 Jermaine Barnaby
A police man mount a crime scene tape near the Kingston Public Hospital after the gun attack on a man near the facility today.

The police are reporting that the man who was this afternoon shot while leaving the Kingston Public Hospital was released from hospital only days ago after another attack.

He is now in critical condition.

The man and his girlfriend were admitted to hospital on July 7 after being shot in Mountain View, St Andrew.

He was subsequently discharged but his girlfriend was not.

It’s reported that around 2 o’clock this afternoon, the man went to visit his girlfriend and upon leaving was attacked by a gunman.

The man attempted to run, but was impeded because of his previous injuries.

Witnesses say he was cornered by the gunman and shot several times.

The gunman then ran in the direction of a nearby church.

Up to a short while ago, several cops were at the scene conducting searches.