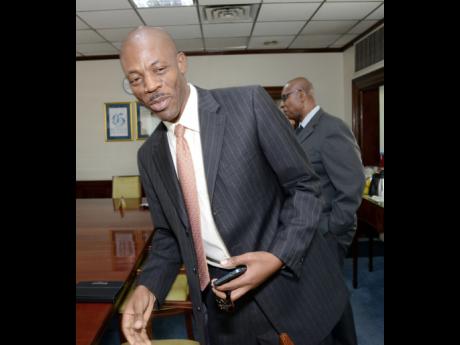 Ricardo Makyn
Police Commissioner Carl Williams, on arrival at The Gleaner, yesterday, for a meeting with editors and senior reporters.

Commissioner of Police Dr Carl Williams declared yesterday that the Jamaica Constabulary Force (JCF) is committed to doing everything possible to reduce the wave of murders gripping the island.

Williams, during a visit to The Gleaner's North Street offices, said his proposal to amend the Bail Act to have a person arrested and offered bail, represented an attempt to "bring criminals under criminal justice supervision before they are charged".

"If, for instance, you are investigating someone for a crime and you don't yet have all the evidence, you could have a situation of arresting and bailing with certain conditions until you are formally charged," said Williams.

The commissioner stressed that he was not suggesting any breach of citizens' constitutional rights.

Williams added: "If we are able to take them into the system and exercise a greater level of supervision over them, whether it is through pre-charge bail or another means, then at least we should be able to impact their activities."

The commissioner said further, that it would help to reduce the number of incidents of persons being taken into custody before the prosecution is ready to go to trial with a matter.

Arguing that it is "something that could help us", Williams has appealed for support, stating, "we are trying everything that is legally possible to reduce crime".

"... There are criminals out there who are committing crimes and we are unable to charge them because of the fact that people are not coming forward to give evidence as witnesses," he said.

The Independent Commission of Investigations (INDECOM), has given support to the proposal, but noted attorney Hugh Wildman has said that Williams' position goes against the spirit of the Constitution.

The police force has been struggling to contain rising murders on the island which have surged past 600 up to this month and, on current trend, will top the 1,005 recorded in 2014.