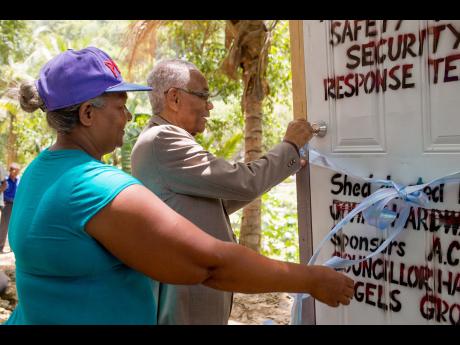 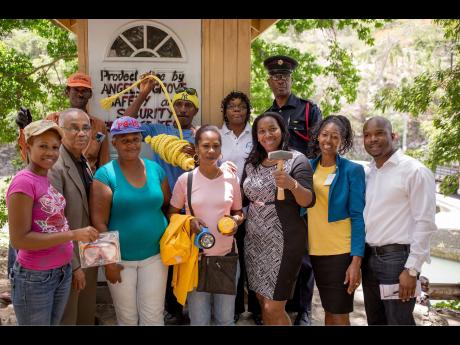 Contributed
Dr Carlton Davis (second left) chairman of the Board of the National Housing Trust (NHT) with a group of divers at Flat Bridge displaying the new equipment and gear handed over to them by the Angel’s Grove Citizens' Association led by their President Melrose Johnson King (second right –back row). Also in the photo are Councillor for the Angel’s Division Patricia Harris (third right, front row) and Superintendent of the St Catherine Fire Services James Lee (right, back row) and other members of the business community.
1
2

The National Housing Trust (NHT) is taking steps to assist in the infrastructural development of rural and inner-city communities.

Chairman of the NHT Dr Carlton Davis says the Trust is looking at the legal framework which would allow it to become more proactive in the development of these communities.

He was speaking at a handover ceremony of a storage facility and equipment for volunteer divers in the Bog Walk Gorge in St Catherine on Wednesday July 29, 2015.

The storage facility along with the equipment was handed over to the divers by residents of the nearby Angel's Grove Community. Angels Grove is an NHT scheme which has benefited from capacity-building support through the Trust's Social Development Department.

The NHT chairman said the efforts of the Angels Grove citizens "demonstrate an exemplary sense of community and a tangible notion of self-reliance" for which the association must be commended.

Davis said building better communities continues to be one of the priorities of the NHT, as a means to preserving infrastructure and maintaining order. He said the Trust will be strengthening the work of its Social Development Department to assist more communities.

President of the Angel's Grove Citizens' Association, Melrose Johnson King, said the project has been in the making for the last two years. She thanked the Flat Bridge divers whom she described as "brave and selfless". The project was made possible through the kind support of corporate entities in and around the Angel's community.

Meanwhile, a tearful diver, Cassandra Slew, expressed gratitude to the Angel's Grove Citizens' Association for the equipment which included sledge hammers, crowbars, ropes and goggles. "Plenty of times things happen, and we can't help. It's risky and sometimes we just have to let go" she said pointing out that some lives lost in the Rio Cobre could have been saved with the right equipment. They are now appealing to corporate Jamaica for further assistance in providing training and additional equipment for the divers.

Angel's Grove, a community of choice, is an NHT scheme located on the outskirts of Spanish Town, St Catherine, with 630 units and approximately 2,000 residents. Angel's Grove was the 2010-2011 NHT Best Schemes champions.