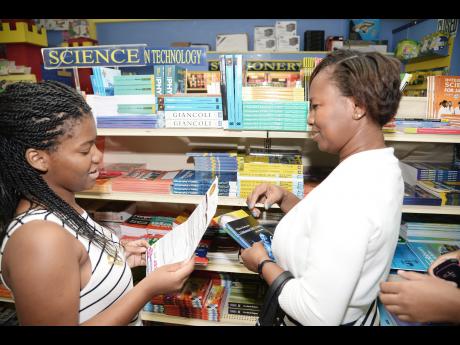 The ministry of Education and members of the local book industry are promising minimal increases in the costs of textbooks this year, but some parents who have already started purchasing books are rubbishing this claim.

"That weh the ministry a talk bout is foolishness," said Marsha Butler, as she pulled the large plastic bag she had just received from a bookshop in downtown Kingston over her shoulder.

Last Tuesday, Minister of Education Ronald Thwaites told Parliament that the average cost of textbooks for students in grades one to three should be $4,500. According to Thwaites, students preparing for the Grade Six Achievement Test (GSAT) should only purchase workbooks for all four subject areas, and the cost of these should average $7,500.

However, parents who spoke to The Sunday Gleaner called those guidelines unrealistic.

One parent charged that the booklist for her eight-year-old daughter who is about to enter grade two has more than five textbooks.

"There is Integrated Studies, English, Math, Social Studies, reading text and science books, and none of these are under $1,000, so tell me how can all of these cost $4,000?" asked the irate parent.

Another parent, who said she was shopping for her son who is about to enter grade four, told The Sunday Gleaner that the cost of the books this year is a major concern for her.

"Every year things go up. So far I have bought three books and I spent over $5,000 and I still have four more to buy. So things definitely gone up, because last year I'm almost sure $5,000 got me everything on the booklist," said the

However Steadman Fuller, vice-chairman of the Book Industry Association of the Jamaica, told The Sunday Gleaner that parents are seeing a downward trend in the cost of most textbooks this year.

"The fact is, because of the steady exchange rate for most of last year there should be no dramatic increase in the cost of most imported textbooks this year; as a matter of fact, some prices have actually trended downward," said Fuller.

He argued that should there be any increase in the cost of textbooks, this would not be more than the 12 per cent that was found in the Consumer Affairs Commission's survey in 2014.

"If there is any variation, it would be a function of published price increase rather than exchange rate increases, which would be just about 10 to 12 per cent."

According to Fuller, despite the financial difficulties being faced by many Jamaicans, the necessary textbooks for children are purchased once each year, and the value of these should not be understated.

"I have been in the book industry for more than 40 years, and if there is one commodity that people think should be less expensive than anything else, is books; they feel that information should be free," argued Fuller, who is also the custos of Kingston.

"The fact that these books are bought once per year, and when you consider the competition which exists for places at the secondary school level, a GSAT book list of $13,000 should be viewed as an investment; and yes, I know times are hard but I think priority has to come into place."

Fuller also disagreed with the education ministry's guideline for the costs to be spent on textbooks per grade, as he argued that the ministry has failed to take into account the specific needs of each child.

"There are four areas of study that children are tested at the GSAT level, and if parents should buy only one book per subject area you have already passed the $7,500 projected guideline, and it's impractical to think that a student will be able to reach mastery in a subject area by following just one set of principles," said Fuller, a former educator.

"So teachers may prescribe two or three textbooks to ensure the child has a complete understanding of the subject area, and if just two books are prescribed for each subject area, then we are already talking about eight books."

Fuller argued that despite the financial hardships, a limitation on the number of books to be bought for children was counter-productive.

"The next thing about it is that with so much money being spent on things of little value in this country, and books being the stores of knowledge, we should be encouraging parents to buy as many as they can afford, rather than to say buy only $5,000 worth of books, because I'm sure the ministry will not give a guideline to parents to spend only a certain amount on shoes per year," said Fuller.