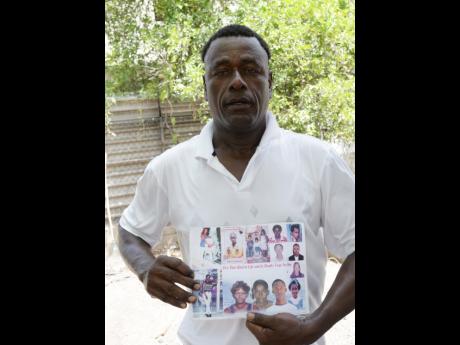 Jermaine Barnaby
Anthony Anderson showing the funeral programme for his common-law wife and three children who were murdered in the 2010 Tredegar Park massacre. 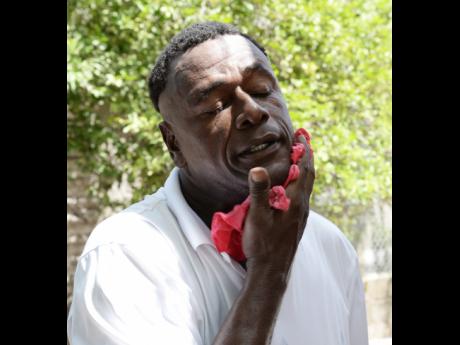 Jermaine Barnaby
Time has not healed the wounds which Anthony Anderson has faced in the five years since his common-law-wife and three children where killed in Tregedar Park. 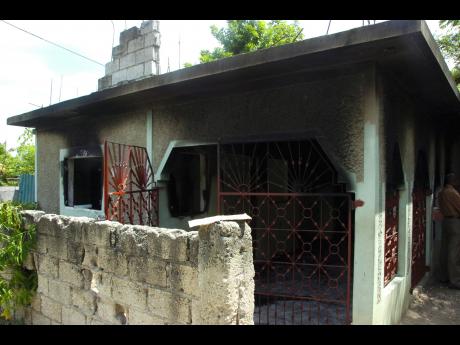 Norman Grindley
The burnt out house where gunmen killed four persons during the 2010 massacre in Tredegar Park. 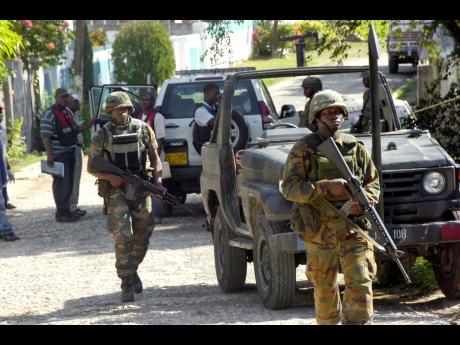 Norman Grindley
Police and soldiers patroling the streets of Tredegar Park, St Catherine, in the immediate aftermath of the massacre of eight persons in 2010. 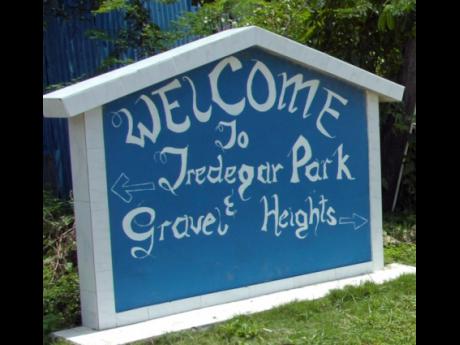 Norman Grindley
Tredegar Park after the terror. Soldiers and police maintain their presence in the troubled community.
1
2
3
4
5

Almost five years to the day after gunmen killed eight persons in Tredegar Park, St Catherine, Anthony Anderson, who lost four members of his family, has found that the old saying 'time heals all wounds' is not quite true.

"A five years now them kill me wife and three kids, and boy, it's been five of the hardest years of my life," Anderson told The Sunday Gleaner on the eve of the August 13, 2010 massacre that rocked the small community and shocked the nation.

"In the midst of everything they left five little kids, and me alone have to be mother, father, grandfather and everything to them, so no matter how me feel sad or depressed, I just have to stand up strong for them," added Anderson as tears welled up in his eyes.

A long-running feud between gangs from Tredegar Park and neighbouring Gravel Heights in St Catherine hit fever pitch when heavily armed men invaded the Tredegar Park community in the wee hours of the morning. Residents reported that gunfire rang out in the community for almost 45 minutes, after which eight persons were found dead.

"See them there," said Anderson as he pointed to the funeral programme that bore the images of his family members.

"My little 11-year-old daughter, gunman put gun to her head and shoot her, them shoot Monique while she had her little baby girl on her breast. Is three children she dead leave in all, plus my two sons, so is five of them I have to look after.

"After them done, them shoot up and set the house a fire, so is different different people place we have to be staying, but me can't leave them because them have no one else but me."

Anderson said he was not aware of the reason his family had been targeted as he was not in the area at the time of the attack and was only made aware of the murders by media reports.

"I wasn't here because I had to go look food for my family, so I was working in Montego Bay, and me get a call from me son say 'Daddy them kill Mommy and Angel and Monique', and then him hang up. So me say 'no sah', is when me hear it on the news flash, me say me go bathroom about a hundred time inna 10 minute, man," explained Anderson with anguish etched on his face.

"And then when me come back and see how them really treat me little 11-year-old daughter, terrible man, nobody no suppose to go inna people house and see woman and children and put gun a them head and murder them like that. Right in front of the little babies them murder my wife."

Anderson said that while the gruesome loss of his wife and children has left him with many sleepless nights, he was most concerned for the children left in his care, who he felt were in need of counselling as they grappled with the physical and emotional effects of the tragedy.

"Sometimes at night, my little grandaughter will wake up in the night and cry say 'Papa, weh me mommy deh', and I tell her I'm going to carry you to Dovecot so you can see where she is, but other times they will cry and say 'me want me mother', and I really feel a way, and I have to try and comfort her and say make we go play little or take a walk little and try and get over it," said Anderson.

"My son who was lying on the bed with his mother when she was killed, the teacher say that sometimes he will just start cry in the class and other times he will just hold his head or walk outside and then come back inside and finish his class work. I feel it for him because he still has two bullets lodged in his leg from the attack, and whenever the time gets cold it swells up."

Despite the mental scars which he said has been affecting his children, Anderson beamed with pride as he described their scholastic successes in the past five years.

"Them bright, bright, you know, because, no matter what, me try me best to send them to school, and see it here, my son got 93 out of a 100 in his GSAT ... and me proud, because me always tell them a education alone can help we overcome this poverty thing.

"Joel was in third form at Calabar High School when them steal him life, but me determined to not make them steal me son chance at a better life, too," declared Anderson.

Despite his efforts, Anderson conceded that the emotional and financial burdens are a lot to bear.

"It's been really rough, because every piece a furniture either get destroyed by bullets or the fire or drenched in blood, so Food For The Poor came and gave us a little house, but it's empty. I can't even move in there because I have nothing, and I really want to give the children a new beginning and get all of them one place, but it's very hard."

Despite the difficulties, Anderson was full of praise for the police, who have established a permanent post in the community, for not only protecting the residents but also for the assistance they rendered to him and others.

"Right now, me really want the Government to promote the police who working in the community, because they are the reason we can breathe and live without fear in Tredegar Park again. Is not once or twice the police come here when I have nothing to eat and give the kids, and they bring a bag of groceries and say this is for the kids, so me would love to see them get a couple stripes on them shoulder. Man, them deserve it."