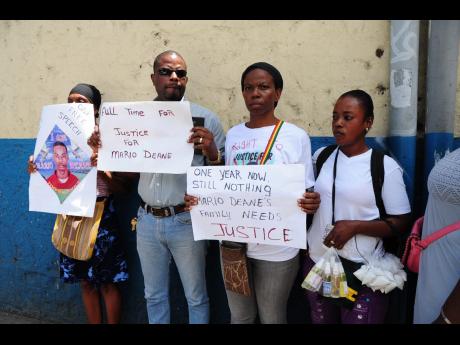 When Mercia Fraser left her Hanover home last week, she was quite composed. However, as she stepped off the bus in Montego Bay, she suddenly remembered that it was while she was on a similar mission last year, she had got the news that her son, the late Mario Deane, was in custody at the Barnett Street Police Station, charged for possession of a ganja spliff.

As the memories of the horrifying beating her son suffered at the Barnett Street lock-up flooded her mind, alongside his subsequent death which occurred three days later (Independence Day), Fraser began to cry. She was hurting so badly, the tears flowed uncontrollably.

"I just found myself crying, crying, crying," said Fraser. "My son was no criminal ... . He was an ambitious young man with big dreams and they took away his life ... . This past year has been the saddest period of my life."

Mario Deane, a 31-year-old construction worker who was also studying to become an architect, was arrested on the morning of August 3, 2014, after he was found with a ganja spliff. Despite being qualified for bail, he was denied bail under questionable circumstance by police personnel at the Barnett Street Police Station.

According to the police, the injuries he suffered, which left him brain dead before he died, were inflicted by three cellmates, a claim Dean's family has rejected. Following intense investigations, six police personnel were implicated in his death and are now before the courts, charged for criminal negligence, among other offences.

According to Fraser, after she managed to compose herself last week, she felt an urge to do something very personal to mark the anniversary of her son's controversial arrest.

"I felt that I needed to do something special on August 3 (the anniversary of his arrest) to mark Mario's death. The pain I was feeling was something only a mother could relate to," said Fraser. "... The first idea that came to my mind was to come out here and stand up before the Barrett Street Police Station ... . I told a number of persons how I felt and they all said, if that is what I feel like doing, I should do it."

Yesterday morning, Fraser was out in front of the Barrett Street Pollice Station in the company of her sister and Dennis Meadows, the co-convenor of Citizens Action for Principles and Integrity (CAPI), who both offered to join her. Her tears were gone; there was a look of defiance on her face. Her mission was all about getting justice for her son.

"It is one year and I am not seeing the justice that I want for my son," said Fraser. "I am not letting up until I get that justice."

As she stood on the sidewalk with a billboard-style placard with a bust photograph of her son, passing pedestrians and motorists shouted out words of solidarity to her, saying they were in full support her effort to get justice.

"In addition to losing my son, I feel as though I am also losing my daughter (Sadiki Deane) too ... she was very close to her brother and she is just pinning away ... constantly crying," said Fraser. "I don't know how she is managing her studies (she is training to become a lawyer) because she is hurting so bad."

Deane's cellmates were also implicated for his death and are before the courts.