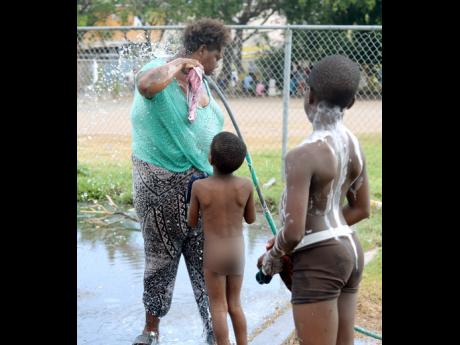 Jermaine Barnaby
The scarcity of water forces this mother to give her children a bath in the park in Arnett Gardens.

The National Water Commission (NWC) has indicated that it will not be introducing any new water restriction even as the drought continues to hold the country in a vice grip.

Speaking with The Gleaner after a review meeting held at the water company, Corporate Public Relations Manager at the NWC, Charles Buchanan said that a decision was taken to maintain the alternate day supply in the Kingston Metropolitan Area (KMA).

He explained, “We looked at the inflows and yes, the inflows have continued to decline at Mona Dam and Hermitage, albeit slightly but they continue to fall on a daily basis. But what was also considered was the amount of water that we have available across the Corporate Area and we found that we have in excess of 30 million gallons of water being distributed across the Corporate Area on a daily basis,” he said.

“With that level of water being distributed it is more effective if the commission were to keep the alternating day supply and concentrate at trying to improve the service in those pockets and areas in which we have received complaints of extended periods of disruption.”

Buchanan went on to explain that water supplies have been augmented by the activation of at least two of the nine wells which the company has announced as alternative sources that it would be tapping into.

“We have been able as we had indicated before, that part of our strategy is to restore into operation and maximise the yield from underground water sources in our wells across the Corporate Area,” he said.

The two wells he said were activated in the last two weeks and would provide an additional one million gallons to the current water supply. Buchanan also said four more wells would be activated by the end of August.

“Our objective is to supply water as much as possible to our customers, but if we are forced to (increase the restrictions) by the circumstances, we will implement them. When we did the assessment it was agreed that there is no need for further restrictions,” he said.

Buchanan also noted that those customers who have been severely impacted by the water restrictions should anticipate improvement in supply.

The NWC instituted nightly lock-offs as its first round of restrictions when the drought conditions and inflow to its systems deteriorated. Constant Spring, Mona and Hope Treatment plants in the Corporate Area were shut down nightly, so too was the  Seaview Filter Plant in St Andrew. Water supply from the Tulloch Springs system that supplies Portmore was also restricted, while St Andrew residents who are served by the Drummond Filter Plant, experienced reduced water supply.

As the conditions worsened the NWC started alternate day supply and contemplated supply every two days.