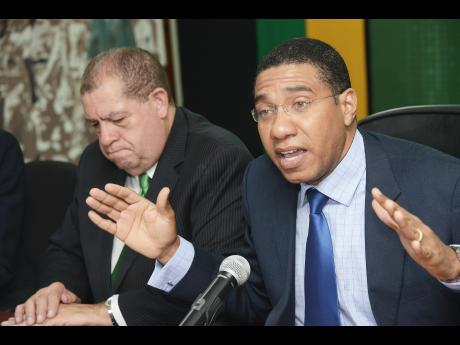 AMID HOWLS of criticism from the parliamentary Opposition that the Government has mortgaged the future of Jamaicans through an expensive PetroCaribe debt buy-back deal, Finance Minister Dr Peter Phillip says he will be using a press briefing to put the matter to rest this weekend.

"They are wrong, and I am going to keep a press conference on Friday," Dr Phillips told The Gleaner yesterday shortly after the Jamaica Labour Party (JLP) accused the Government of being reckless with the transaction.

Despite the Ministry of Finance on Monday issuing a media release stating that the deal would save Jamaica US$250 million in debt payment, Opposition Spokesman on Finance Audley Shaw said there was deception at hand.

"What the Government did not tell the Jamaican people is that at the end of 25 years, we would have fully paid off the PetroCaribe debt since the interest and amortisation are paid over the period," Shaw said.

He argued that the deal that has been struck will see only the interest being paid over many years.

"At the end of the period, we will have US$1.5 billion that we have to pay back versus being in a situation where we would have fully paid the PetroCaribe debt," Shaw said.

Andrew Holness, the leader of the Opposition, said that the Government, in paying off the PetroCaribe debt, was putting itself under a cash-flow threat as a result of liquidating the debt.

"When you hear Wall Street celebrating, all it means is that the Jamaican taxpayers are going to go into their pockets, take out more money, and pay it over to Wall Street," Holness said.

Jamaica, on July 23, raised US$2 billion on the international capital market - the highest amount it has ever raised during a single transaction window - at the lowest rates it has ever been able to access from that market.

Jamaica raised the bonds to pay off about US$3 billion in oil debt to Venezuela. The debt has been discounted by about 50 per cent as part of the buy-back.

"This transaction is expected to reduce Jamaica's debt-to-GDP ratio by approximately 10 per cent, which is a significant reduction in this key economic indicator. Further reducing the country's debt-to-GDP will not only solidify our success under the Economic Reform Programme, but should improve the country's standing with the international rating agencies and make Jamaica even more attractive to both local and international investors," the ministry said.

Holness said that while the Opposition has no problem with the Government trying to reduce the debt and manage debt repayment, it makes bad policy to be seeking to liquidate the inexpensive PetroCaribe debt, which has a one per cent interest rate.

"What is of great concern to us is that in trying to manage down the cost of debt, and the stock of debt, that the Government would seek to liquidate a debt that is not troubling anybody. The PetroCaribe debt is one of the mildest debt arrangements that any country could get," Holness said.

He said that unlike the Dominican Republic, which has also liquidated its debt, Jamaica has had to borrow more expensive money from the capital market.

He said, too, that with a way lower debt-to-GDP ratio than Jamaica, the Dominican Republic does not have a cash flow problem and is unlikely to find itself in trouble as a result of the transaction.

Fayval Williams, deputy spokesperson on finance, said that there has been a paucity of information on the deal. She said that, nonetheless, the JLP was convinced that it is a "costly transaction for the people of Jamaica".