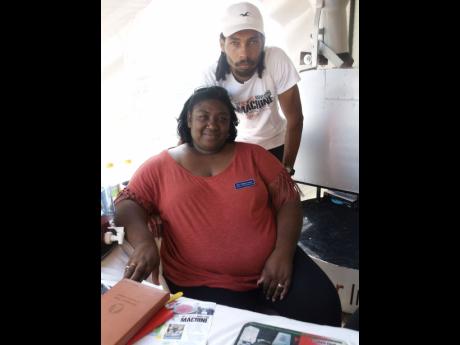 The Turners - Oral and Allison are making a success of both their marriage and business.

Her husband, a man blessed with a curious mind and one who is consumed by the need to find out how things work, has put that to good use, resulting in their upcoming October 1 Sorrel Harvesting Machine.

Allison, who is super proud of her husband of many years sheepishly, confessed that she did not start off as his biggest fan.

"When he told me he was going to invent the machine, I told him if it could be done, it would be done already!"

There were some nagging moments as Oral slaved away at the vision in his head. Wanting to appease, he even ran a light in the garden so he could be at his most creative in the nights.

That process meant nights of frustration, many failed attempts, money going down the drain, but still her husband refused to give up.

When he finally got it all together, presenting her with a fait accompli, she became his most loyal supporter, fighting furiously to ensure his dream got off the ground.

But that was no easy feat as the couple said they got so many 'nos' and discouragement they shelved it for about two years.

Family and Religion caught up with the couple last week Friday at the 63rd staging of the Denbigh Agricultural, Industrial and Food Show in Clarendon.

Oral relived his days of frustration, telling why giving up was not an option for him.

"I love to know how things work and I just kept on going," he said. While he couldn't put a tag on what it cost him financially to keep the dream going, he said he spent a lot of money as sometimes he had to scrap what he did and start again.

However, once he "got it right", he described it as "the best feeling in the world, to know I finally did it."

That joy, however, was short-lived as he soon found out having an invention and getting it on the market were worlds apart. He got more discouragements and nos than he could count, until his wife got the idea to ask the late Minister of Agriculture Roger Clarke for help.

One look at the demonstration and Clarke saw its great potential.

The next step for the Turners was going to the Development Bank of Jamaica for a loan to build the new prototype ... miraculously it was approved.

After a successful pitch with First Angel Jamaica, the Turners are now looking forward to their big day on October 1, when the business will be officially launched.

The business launch is as a result of three years of research and development from the husband and wife team who forms Turner Innovations Limited.

The Sorrel Harvesting Machine will allow Sorrel farmers the option of taking their crop to Comma Pen, St Elizabeth, where the couple is based, or invite them to their farms for direct service to de-seed their crop.

The Sorrel Harvesting Machine will take the tedium out of separating the red fleshy flower (calyces) from the seed pod from the Roselle (Hibiscus sabdariffa) plant. Sorrel farmers can now plant bigger crops, consider larger contracts and be more competitive in the global market.

Looking ahead, the couple is already planning on offering a range of new products in the near future.