WRONG LESSONS! - Children acting out sexual acts after being taught by adults 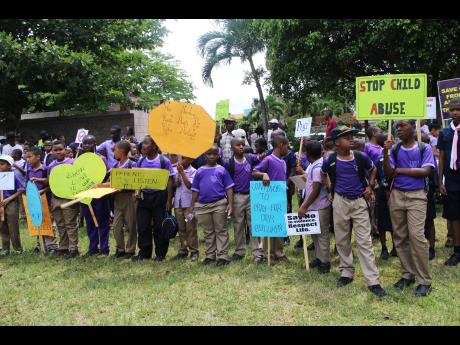 Scarred by sexual abuse, sexually exposed or otherwise sexualised, some children are acting out these bad lessons in places of play and learning.

"One of the things I am seeing a lot of ... is children as young as three, four, five years old are molesting other children," an investigator attached to the Child Development Agency told The Sunday Gleaner.

According to the investigator, who asked not to be named, the society needs to be re-educated to recognise that children's curiosity is being piqued and they are getting sexually aroused based on what they are being exposed to, and are experimenting.

"Parents have to be mindful of what they are exposing their children to; the movies you watch, privacy in your moments with your partners, because they are hearing and they are seeing, and when children hear you make sounds and they know that it is pleasure then they are curious," added the investigator who has spent more than 10 years working with children.

But psychiatrist, Professor Wendel Abel, says despite the disturbing incidents reported there is no reason for hysteria, as children will naturally experiment and explore.

According to Abel, this underscores the need for children to be properly monitored and guided.

"Parents and teachers have to be careful how they deal with that (child experimenting), because children sometimes experiment sexually, and what needs to be done is that they need to be guided to engage in more appropriate sexual behaviour," said Abel, who is a senior lecturer in the Department of Community Health & Psychiatry at the University of the West Indies.

"As children form their identity and they are guided and corrected they will engage in behaviour that we call appropriate."

Clinical psychologist, Dr Karen Richards, agreed that some sexual exploration and curiosity is normal at a certain age, within a certain context and among children at a comparable age.

However, Richards warned that the problem that arises is when children are coerced or tricked into sexual acts, such as one case reported to The Sunday Gleaner where a father made his six-year-old daughter watch a pornographic movie.

"The sexualised actions of children may be motivated or stimulated by their experiences of abuse or exposure to sexual material such as pornography or watching others; older siblings, cousins, guardians etc., engage in sexual activity," said Richards.

"Acting out behaviour can be complex and should be understood within the context of a biological, psychological and social model. Professional support or guidance should be sought if there are concerns."