Injured JUTC driver to be questioned in fatal freak crash 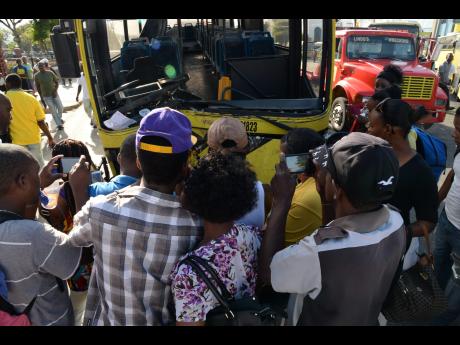 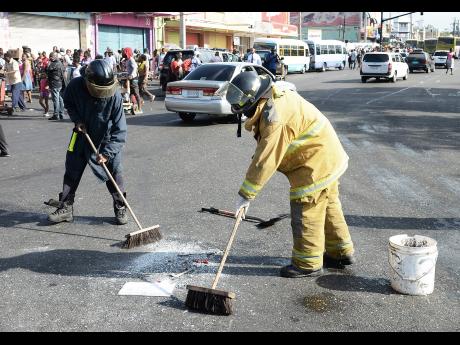 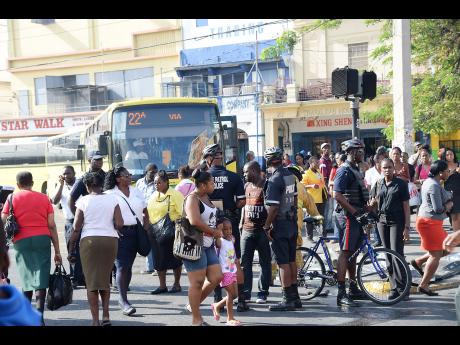 Jermaine Barnaby
Scores of persons on the scene of the freak crash involving a Jamaica Urban Transit Company bus in downtown Kingston yesterday.
1
2
3

It was a nasty sight at West Parade in downtown Kingston yesterday morning as looters descended on a crash scene, pulling splattered melon and other fruit from the spot where a slipper vendor was crushed and another person injured by a Jamaica Urban Transit Company (JUTC) passenger bus.

The driver of the bus was also rushed into surgery and could lose a leg, said Colin Campbell, managing director of the JUTC, who added that investigators were late yesterday evening still trying to determine the cause of the crash. The incident occurred shortly before 7 a.m.

According to Campbell, the bus driver had just let off his passengers at South Parade and, before turning right at the St William Grant Park, the bus swung violently before slamming into a fruit cart and the pedestrians standing at West Parade.

Onlookers said the bus collided with a motor vehicle before crashing, but Campbell could not confirm that.

Shocked vendors told The Gleaner that as the accident unfolded, pedestrians scampered for cover.

However, the dead man, whom they identified only as Delroy Roberts of Jones Town in Kingston, had been squatting to adjust a slipper on a female customer's foot and had no time to react.

The woman was hit and seriously injured while Roberts was hit and pinned against a column close to where he sold his footwear. His lower body was crushed on impact, recalled some vendors with tears streaming down their cheeks.

"The driver was rushed straight to the Kingston Public Hospital for surgery, so we have not been able to interview him," said Campbell, who said that an interview with the driver, who has been working with the JUTC since 2010, is critical to the investigation.

"It has traumatised the staff because the scene was quite gruesome. So we have got counselling for the staff over at Rockfort because it was a bus that did duties from the Rockfort area. Right now, we are trying to put the pieces together and attend to the staff members who were affected," continued Campbell.

Up to late yesterday evening, the police had not released an official report on the incident, but onlookers said that a handcart vendor was also hit by the bus.

Yesterday, after authorities had removed the body and the disabled bus from the scene, passers-by converged on the scene where splattered watermelons, blood, flesh, banana, pears and other fruit were strewn.

Most took the time to wipe off the items before putting them with their personal belongings.