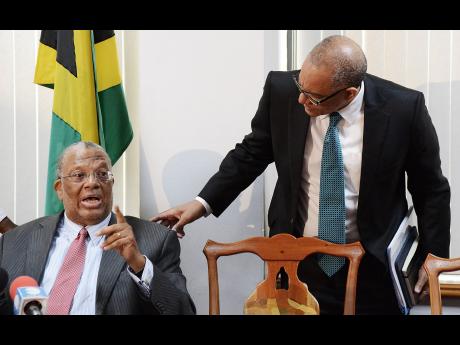 Rudolph Brown
Dr Peter Phillips (left), minister of finance and planning, speaks with Brian Wynter, governor of the Bank of Jamaica, after after addressing members of the media about the PetroCaribe debt buy-back during a press conference at Phillips' Heroes Circle-located ministry yesterday.

Finance and Planning Minister Dr Peter Phillips says the US$2 billion raised on the international market to facilitated the US$1.5-billion PetroCaribe debt buy-back will lower Jamaica's debt servicing by a little less than US$300 million over a 30-year period.

In addition, the money used to fund the purchase of the PetroCaribe debt requires that, for the first 10 years, the Government will only make interest payments with no principal payments.

He said the transaction would allow the country to reduce its debt-to-GDP ratio by 10 per cent.

Addressing a press conference at the Ministry of Finance yesterday, Phillips said the debt buy-back will not require the imposition of higher taxes on Jamaicans.

He also dismissed criticisms that the move would "mortgage the future of children not yet born".

The Opposition Jamaica Labour Party has criticised the Government for going to the capital market to raise funds to pay off the PetroCaribe debt.

The JLP charged that the administration should have approached the multilaterals as they offer money at lower interest rates.

Phillips contended that while the Government would welcome the cheapest possible financing for the debt buy-back transaction, it was "simply not possible to do so".

Said Phillips: "The fact is that we have been having discussions with both multilateral banks for more than a year regarding our interest in securing additional financing from them."

According to Phillips, another country with a similar rating went to market on the same day and had to secure financing at three percentage points above what Jamaica was able to secure.

Phillips said what was significant is that global institutional investors were anxious to hold Jamaica's debt, which demonstrated investors' confidence in Jamaica and, in particular, the Government's economic reform programme.

"Comments that take the position of negating the role or the commitment of our international partners are not helpful," said Phillips, adding, "It boggles the mind that people would want to make life harder for Jamaica simply in order to get to govern it because then you would be making it harder for yourself as well."