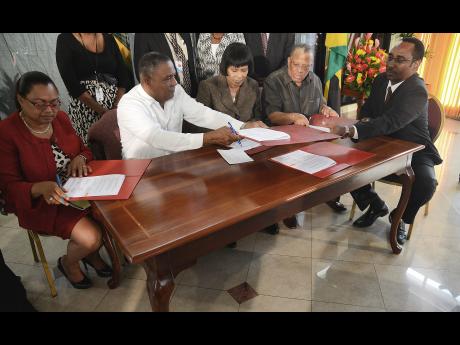 Ricardo Makyn
From left: Helene Davis Whyte, vice president of the Jamaica Confederation of Trade Unions; Horace Dalley, minister without portfolio in the Ministry of Finance and Planning; Prime Minister Portia Simpson Miller; Finance Minister Dr Peter Phillips; and Oneil Grant, president of the Jamaica Civil Service Association, sign the heads of agreement for the contract period 2015-2017 between the Government of Jamaica and the Jamaica Confederation of Trade Unions representing public sector workers at Jamaica House in St Andrew yesterday.

Tertiary-level children of some 50,000 public-sector workers are to benefit from a $45-million fund providing education grants as part of a public-sector wage agreement signed by the Government and the Jamaica Confederation of Trade Unions (JCTU) yesterday.

The disclosure was made by Prime Minister Portia Simpson Miller, who outlined the fund as one of the critical components of the plan aimed at bolstering economic and social development in the island.

The agreement ends a six-year public-sector wage freeze, which has caused much uproar among affected workers.

"The agreement is for two years commencing April 2015 to March 2017. Twelve items from the previous contract period are still being pursued," said Simpson Miller, noting a projected increase of four per cent in year one of the contract and three per cent in year two.

There will also be increases in tailoring, meals, supper, taxi, refreshment, shift and night premiums, special-duty subsistence, death and funeral allowances, and agreement for a compensation review, which will establish relations between and among groups in the public and private sectors, said Simpson Miller.

"There will be a fund totalling $45 million for tertiary education grants for children of public-sector workers over the two years of the contract. There is also agreement for the maintenance of benefits across the public sector," said Simpson Miller. She listed tertiary-education loans, refund of tuition, government transportation, and skills training among those benefits.

At least one land or housing project will also be developed as part of the contract, she said.

Helene Davis Whyte, vice-president of the JCTU, said eight of the 11 unions within the JCTU have signed off on the deal and at least one other is expected to get on board today. The other union representative was away, she said.

"What we have is the vast majority of unions who have decided to go ahead in the particular circumstances, having established that this was the best deal we could have got in this particular time," she said, noting that some groups, including teachers and the police, were not included in the agreement.

"While the unions did not get all that they wanted, you would have heard that the Ministry of Finance ended up shelling out far more than they budgeted and expected. So we feel that it is the best that is possible at this time," said Davis Whyte.

"The only persons who are able to judge us in this way would be our members, and the vast majority of them are on board and they have indicated their acceptance and are willing to move on," she said.

In the meantime, Minister of Finance and Planning Dr Peter Phillips described the agreement as historic.

"It signifies the continued commitment of the public sector unions to the economic reform programme ... the manner in which the negotiations have been conducted. While, obviously, each party has divergent interests, I think it is fair to say that these negotiations have reflected the kind of maturity that ought to characterise deliberations and negotiations such as these," said Phillips.