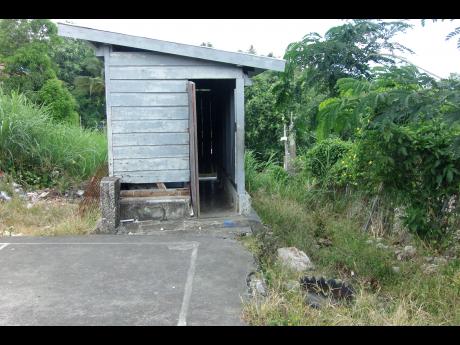 Gareth Davis
A pit latrine (toilet) at Mount Pleasant Primary in Portland, which has out-lived its use.

With the start to 2015-2016 academic year less than a month away, some educational institutions in Portland are struggling to find money to carry out the necessary repairs, which is further compounded by severe drought conditions.

One such school is Mount Pleasant All-Age, which is plagued by termites, and as a result, Principal Dian Vidal pointed out that the thought of getting a new building would be a welcome sight for the entire school population and the community.

"It is not that the building is deemed to be unsafe," commented the principal.

"It's just that it is an old structure built in the 1930's out of wood, which has probably outlived its period. We have carried out repairs in recent times, and, therefore, the structure is by no means unstable, however, termites have been spotted, and this has posed serious problems to the structure. We will be commencing repairs to doors, windows, and partitions, so as to eliminate the use of chalk boards that are currently in place to separate class rooms," she added.

According to Vidal, a math room, which is heavily utilised by students, is leaking profusely whenever it rains, and that, too, is a problem.

The principal noted that frequent trucking of water to the school by West Portland Member of Parliament Daryl Vaz has assisted in alleviating the water problem, but noted also that at least three additional water tanks are needed, especially with the expected increase in the student population for the new school term.

A somewhat similar situation exists at Nonsuch Primary, where principal Marlise Adiansingh is making a passionate appeal for help, as approximately 67 students were (are) crammed in a church building during the last school term.

"We are cramped for space," commented the principal.

"The school has been using the church building, Nonsuch Anglican Church, for the better part of 40 years. Additionally, the school building is not secured and we are in dire need of a perimeter fence. A shortage of furniture is also affecting us, and we definitely need additional classrooms. There is no erected sign to indicate that a school is housed at that facility. It is a government-run school, but is operated in a church building," she added.

Adiansingh noted that the school was without water tanks, and that in the event that there is water disruption in the pipe lines, classes would have to be suspended.