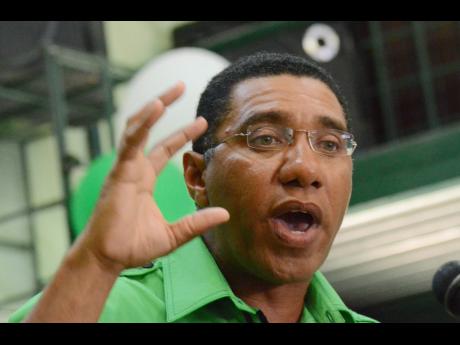 Members of the Jamaica Labour Party's (JLP) parliamentary group are split evenly in their support of Opposition Leader Andrew Holness, despite efforts at presenting the public with a unified front after their latest caucus last Tuesday.

And the posting of a video on the social-networking site Facebook last week with vicious, offensive allegations against JLP members of parliament (MPs) opposed to Holness showed that the unified faÁade presented last Tuesday has already crumbled.

While the party reported that there was no vote on Holness' future during last Tuesday's caucus, it significantly downplayed the challenge he faced.

"It was not discussed ... . It was not necessary; it was not requested," Leader of Opposition Business Derrick Smith told journalists following the caucus.

"Forget this thing about people questioning Mr Holness' leadership. Some will always question it, [but] within this room and within the wider party, that's not an issue," added Smith.

Despite Smith's denial, The Sunday Gleaner has confirmed that at start of the meeting last Tuesday, a letter demanding an immediate vote on Holness' continued role as opposition leader, which was signed by two senior MPs, was presented.

"Based on the utterances at Friday's (August 7) meeting, it is clear that the opposition leader does not have the support of a significant number of MPs," read the letter in part.

"Before moving forward, we need to determine if the leader of the opposition has enough support to command the authority necessary to move us forward as a parliamentary group.

"We now ask for a secret ballot, with the leader recessing himself in the traditional manner," ended the letter.

According to Sunday Gleaner sources, the tabling of the letter started a firestorm, but with Smith adamant that he would not be presiding over a vote, and with some MPs equally adamant that he did not have the right to decide whether a vote was done, it seemed a showdown was inevitable.

The vote was postponed at the ninth hour after a rural Jamaica MP, who was expected to vote against Holness, indicated that he had had a change of heart and would stick with the man who has led the party since 2011.

"At that time, it was clear that neither side had the advantage, so after talks and negotiations, it was decided that there would be no winner, so the vote would be futile," a JLP source told The Sunday Gleaner.

"If either side was confident of a victory, there would have been a vote, so even though Derrick was correct that there was no vote, it was only avoided because it was clear that it was 10-10.

"In addition, Andrew pulled off a masterstroke to buy himself time, when, in an emotional presentation, he accepted that there must be some truth to some of the criticisms against him and vowed to make some changes in the way he operates," added the source.

According to Sunday Gleaner sources, Holness was given until the end of August to prepare a plan with clear deliverables for what the party has dubbed 'Project Victory', which is to ensure that the JLP forms the Government following the next general election, with the parliamentary group to review the developments at the end of September.

"That is how the MPs emerged from the room with any sense of togetherness to face the media, with everyone willing to wait until the next six weeks before some definite decisions are made. So after Tuesday, it was a case of burying the hatchets for now," added the source.

But the long knives were again drawn late last week after the posting of a video on Facebook reportedly by a person with close links to the Holness camp.

The Sunday Gleaner cannot report on the details of the video, which are libellous, but senior members of the party, including Holness, have reported that they are disgusted and upset about the post as they moved to cauterise what is now a gaping wound in the party.