Britney Baxter turns around performance to secure eight grade ones 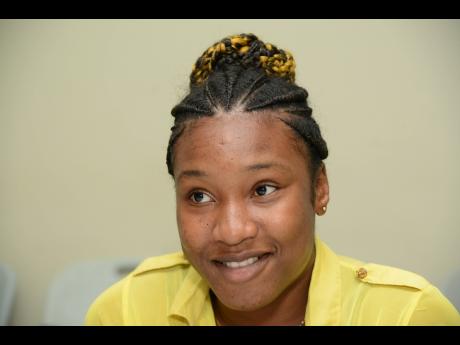 Rudolph Brown
Britney Baxter: My grades were terrible in mathematics and biology. I was really having a hard time with those subjects.

Britney Baxter was struggling with mathematics, biology and English literature.

Having secured grade ones with distinction in maths and biology and in six other subjects she sat, Britney credits her stellar performance in the Caribbean Secondary Education Certificate (CSEC) to the support of her brother and cousin. The St Hugh's High School student also shared that her literature teacher was instrumental in pushing her to improve her grades.

"I love my teachers, especially Ms Miller, my English literature teacher. I never thought I would get a grade one in English literature, but she definitely made it possible. She really pushed me a lot and her discussions in class were awesome," she said.

What is even more amazing about Britney's performance in the English literature exam is the fact that she did not even finish the exam because she was so nervous.

"When I went to the exam, initially I was not nervous, but sitting there waiting for the exam to start, I started to feel some anxiety and because of that, I didn't finish the exam and I was really disappointed and I felt really bad, but I told myself that I would not let it get the best of me, because if I do, I will not go in the other exams feeling very confident," Britney explained.

While she lauds the strong support of her family as a key ingredient to her performance, Britney noted that she was motivated to turn her poor grades around and do well in her CSEC exams because of a strong desire to prove that where she came from did not define her.

A resident of the inner-city community of Arnett Gardens in St Andrew, Britney had a lot riding on her performance in the CSEC exams.

Knowing that her grades were not up to par, she said she had to work twice as hard as the other students in her class.

"There were times when I had to go to school from Sunday to Sunday. If I wake early, I don't go to bed until it's really late so it was really tiring ... . My brother, Wilton Baxter, helped me with information technology and he got help for me in math when I was failing it terribly. My grades were really, really awful, but over time I grew and improved to the point where I became a top achiever in the subject," she told The Gleaner.

Britney plans to apply for the sixth-form programme at Wolmer's High for Girls, a school she had always wanted to attend. The aspiring accountant says she will continue to do her best to make her family and community proud.