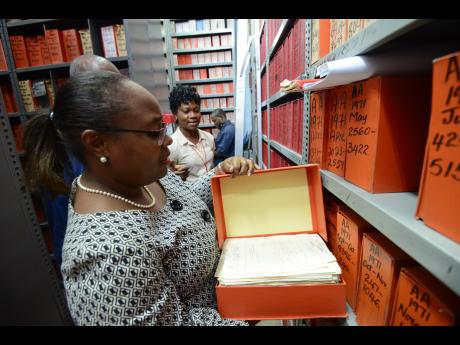 The Registrar General's Department (RGD) has revealed that it does not have records of the deaths of a number of Jamaicans, particularly those from lower socio-economic backgrounds, who die violently or are killed in motor vehicle accidents, as their families have failed to register their passing at the RGD.

While the registration of deaths at the RGD is a requirement under Jamaican law, the department says there is cause for concern when this is not done because it could have implications for the electoral authority that is obliged to remove the names of dead persons from the voters' list.

Deirdre English Gosse, chief executive officer of the RGD, said the non-registration of deaths could pose a real challenge for the Electoral Office of Jamaica (EOJ), which collects data on Jamaicans who die from the department in order to cleanse the voters' list.

Deputy Director of Elections Earl Simpson acknowledged that not every person who has died is registered at the RGD.

"We will do what we can do to remove (dead persons from the voters' list), but it is limited and restricted by the quality of the information that we receive from them (RGD)," Simpson told The Gleaner.

He said the law speaks to the EOJ periodically getting information from the RGD regarding all the persons who have died in Jamaica and that data are used to purge the list.

Simpson argued that even when the EOJ collects data from the RGD, it cannot rely on that information alone to remove dead persons from the list, as there is no unique identifier of anybody who has died to tie it with anyone on the voters' list. For example, if the RGD data show that a 'James Brown' from Manchester has died, the EOJ may have another 20 persons with the same name and age from the same parish.

The EOJ would have to contact all the James Browns in that parish to establish which one of these persons has died.

"When we have national registration and everybody has an identification number, then that information would be of better assistance to us than it currently is at this time," he said.

"The national ID will be a big game-changer when introduced, as far as the electoral list is concerned, because we'll be in a position to remove much more dead electors from the list using the current system that we have," Simpson asserted.

He contended that, without national registration, when the Electoral Office gets data from the RGD, "it is like going on a fishing expedition".

And the non-registration of the death of a government pensioner could result in the continued payments of monthly benefits.

She said the families of many deceased persons have made no attempt to register their deaths, particularly if they did not leave an inheritance behind.

"If the person dies in a motor vehicle accident or a shooting incident ... the process tends to be very long, and once the police issue the burial order, then you find that persons just go ahead and bury the body and they don't come to the RGD to register the death."

English Gosse said while it is a requirement under the law for every vital event such as a birth, marriage and death to be registered at the RGD, "in the legislation, there is no fine or penalty, so you are just required by law to register your vital events, so it makes it very difficult to enforce".

Where persons die in institutions such as hospitals, the RGD captures there data, and in the case of persons who possess some wealth, their relatives will register their deaths.

In addition, the RGD gives the assurance that it collects data from the police and local registrars but noted that when it has to rely on persons externally to provide information on deaths, it becomes a challenge.