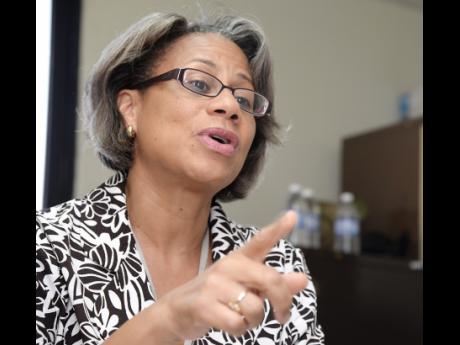 Jermaine Barnaby
Judith Ramlogan, chief executive officer of the Companies Office of Jamaica, highlights the achievements of her agency during an interview with The Gleaner at her offices on Grenada Way, New Kingston.

The Companies Office of Jamaica (COJ), which adopted the executive agency model 16 years ago, is today making major strides as it aims for world-class standards in service delivery.

The COJ had been challenged by the Government to transform a public-sector entity that was never short of red tape into an agency comparable to an efficiently run private-sector firm.

Nearly five years after it received semi-autonomous status, the COJ achieved a significant milestone as it was weaned from the Government's budget and, therefore, does not receive financing from the Consolidated Fund.

Before the COJ became an executive agency, customers who took their documents for registration at the then Registrar of Companies would have to wait for 30 days or more before being told if the registration process had been completed.

At present, COJ clients can take their documents to the agency at 9:30 a.m. and have their company registered by 3 p.m. on the same day.

Chief Executive Officer of the COJ Judith Ramlogan told The Gleaner that one of the most significant achievements of the company to date is its capacity to offer guaranteed service.

While the COJ has made significant improvement in this regard, countries like Singapore, a leader in international standards for company registration, registers a company in about one hour online.

Ramlogan said the entity's online services would be rolled out by December this year, at which time, it expects to further reduce the time it takes to register business names and companies.

The business registration form, which was introduced in 2014, will be available online by January 2016 and will allow customers to register a business name or company online.

This form was introduced to remove the bureaucratic hurdles that made the process of registering business names arduous.

She said after the registration at COJ, it would take the customer days before completing the process at the other agencies.

With the business registration form, a person visits only the COJ and is automatically registered with all the other government bodies.

Owen McKnight, former head of the executive agencies monitoring unit in the Ministry of Finance, believes that the executive agency model has worked, instilling the kind of performance culture that did not exist previously in many departments of government.

He said the productivity incentive scheme, which forms part of the executive agency model, motivates staff to achieve their production targets. If the agencies meet or surpass their targets and workers also achieve their targets, the entity, with permission from the Ministry of Finance, can award cash incentives.

McKnight pointed out that before this scheme, some workers would just go to work and take things for granted.

"From my point of view, generally, the sort of culture that is in executive agencies now is far different from what it was. I remember 1999, and it is a far different picture from what is happening now," McKnight insisted.

He said executive agencies have been relatively successful in delivering their mandate - that of offering better service to the public and to operate on the basis of efficiency, effectiveness, and economy.

With the exception of the Companies Office of Jamaica and the Registrar General's Department, all other executive agencies are still financed by the Consolidated Fund.

McKnight said there are some executive agencies such as the Administrator General's Department that may never become self-sufficient because of the service they offer. This department is mandated by law to administer the estates of persons who die without making a will in cases where there are minor beneficiaries.