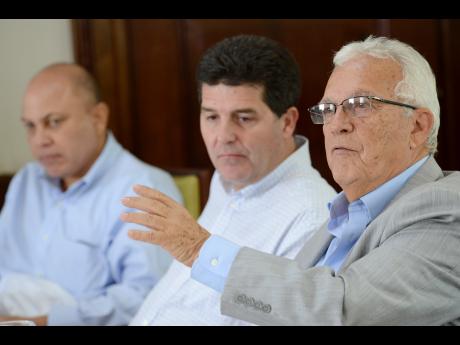 Jamaican shipping and port interests say that inadequate facilitation poses the greatest threat to Jamaica's emergence as a major logistics hub and warn that proposed amendments to the Customs Act, as currently framed, could entrench the problems.

A raft of private-sector groups, including the Private Sector Organisation of Jamaica (PSOJ), have put their concerns in writing to the Government, which should help to inform discussion of the bill by a joint select committee of Parliament, which begins its work today.

"You have a Customs law that is coming to Parliament after years ... and it is not doing what it is supposed to do to create a logistics hub," said Charles Johnston, a long-time shipping industry official and chairman of Jamaica Producers Group (JPG).

"Instead, it is increasing penalties and reasons for penalties," Johnston told a Gleaner Editors' Forum on the topic, which was hosted at the company's North Street, Kingston, offices yesterday.

"We are not going in the direction of making the regime that is needed to make logistics work."

The modernisation of Jamaica's Customs law is among the major undertakings under Jamaica's economic reform programme with the International Monetary Fund.

At the same time, the Simpson Miller administration has made transforming Jamaica into a logistics centre a key plank of its economic strategy.

The current amendments largely upgrade outdated penalties for breaches of the Customs laws, a focus which Jeffrey Hall, managing director of JPG and chairman of porting company Kingston Wharves, suggested reflected the tension that often arises with the Government's need to collect taxes and do things that ultimately drive economic development.

Gordon Shirley, head of the Port Authority of Jamaica, said the parliamentary hearings provide an opportunity for further discussions.

He argued that the bill, in the final analysis, may not be satisfactory to all parties but said that the objective should be to strike a balance between competing interests such as the ability to collect the revenue and trade facilitation.

"On the one hand, there are revenue-collection issues, and you know how important that is to making our targets, and on the other hand, you have the developmental issue, which is growth through logistics. The issue is trying to find the right balance," Shirley said.

"The normal thing is that something is done, the act is drafted, and the opportunity is there to have dialogue around it, and I fully expect that the dialogue will occur," Shirley said.

Johnston, meanwhile, noted that a trade facilitation task force had been set up to overview the Customs Act and the recommendation was for a complete overhaul.

"In Jamaica, we take a long time to change laws. This Customs law has been on our books for a long time," he said.

"When is it going to be changed again? Do everything now, even if it takes six months longer. Do it now and do it properly," he said.

PSOJ President William Mahfood said there are too many government entities that view their roles as agents of protection of the State rather than being facilitators of commerce.

"Although it is a requirement of the economic reform programme, it (deadline) can be pushed back. We have waited long enough for amendments to the Customs Act, similarly the Electricity Act, and there is so much legislation which is decades old. Let us do them correctly," Mahfood said.

Among the complaints of the logistics and shipping interests is the fact that exporters now require special permission from the commissioner of Customs or the collector of taxes to move bonded goods over road.

"You cannot have a logistics hub if you cannot move cargo on the road bonded with all the security that you want between the different ports and between the logistics point. No measure in the new law is dealing with that," Johnston said.

"We are going backways in terms of facilitation instead of forward, and the building of infrastructure will not come unless we address that," he added.

Dr Fritz Pinnock, head of the Jamaica Maritime Institute, said that unlike globally, where the greatest role of Customs is to facilitate trade, in Jamaica, it is an extension of the Ministry of Finance.

He said the current Customs bill is "nothing more than an update of fees".

According to Pinnock, "the gaps are wide" as the bill is "not in alignment with or in support" of trade facilitation.

KWL to develop 300,000-sq-ft warehousing complex in Kingston
'We'll get it done' - Chang says Logistics Hub will be game changer
Maritime sector widens its horizons
A step the right direction!
A path to prosperity - Jamaica’s logistic hub on go-slow while Panama Canal expansion on track