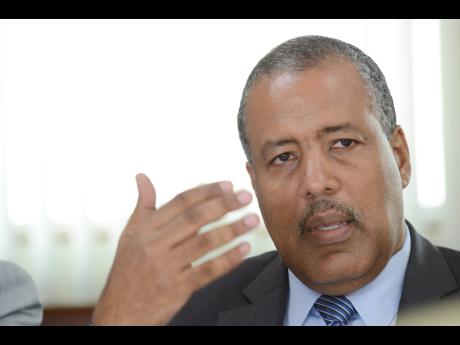 President and chief executive officer of the Port Authority of Jamaica Professor Gordon Shirley yesterday declared that plans for the development of a transshipment port in the Goat Islands areas of the Portland Bight are not dead.

Noting that the Port Authority would view the Port of Kingston as potentially including shipping activities at the Goat Islands, he said, "The project is not dead. It's still very much alive".

Shirley said the framework agreement for the build-out of the Goat Islands is to be reviewed and indicated that he believed that Dr Omar Davies, minister of transport, works and housing, was currently in dialogue with China Harbour Engineering Company (CHEC), which has proposed establishing the transshipment facility there.

"Where you have large capital investments like that, it's likely that when you have the interaction that exists between what could happen at KCT (Kingston Container Terminal) and Kingston Wharves and Goat Islands, that timing may be a function of which developments are occurring first," the Port Authority CEO said as he addressed a Gleaner Editors' Forum at the company's North Street offices in Kingston.

"So if you are coming second, if you are going to invest afterwards, you probably want to make sure you know what is happening with the first one before you move on," Shirley said at the forum, which drew shipping and other industry players together to discuss Jamaica's logistics dream.

The Gleaner reported in October 2014 that two of three entities that prequalified for the grant of a long-term lease of the KCT had backed out, citing competition from the proposed Goat Islands port as a factor that could affect viability.

The two entities - the Dubai-based DP World and PSA, with head office in Singapore - declined to submit tenders for the concession agreement, which would see the winner financing, expanding, operating, and maintaining the port.

Davies told Parliament then that the entities had concerns about the implications for the viability of the Portland Bight area.

He said that "occurred despite a number of initiatives, which were pursued by the Port Authority's management, to protect the future viability of the KCT".

The Government has, for more than 10 months, been considering a proposal from CHEC to establish the transshipment port at Goat Islands.

Shirley had said the ports would not cannibalise each other.

The proposed Goat Islands project is an estimated US$1.5 billion investment said to be the largest ever on a single project in the island's history.

The idea was raised more than two years ago to develop the port, manufacturing, storage, and other logistics-related facilities on the two small, uninhabited islands off Jamaica's south coast, which would be linked to the mainland by causeways.

If it is built, it would fit within the Government's strategy to transform Jamaica into a global logistics centre to take advantage of the US$5.25 billion expansion of the Panama Canal to accommodate mega ships.