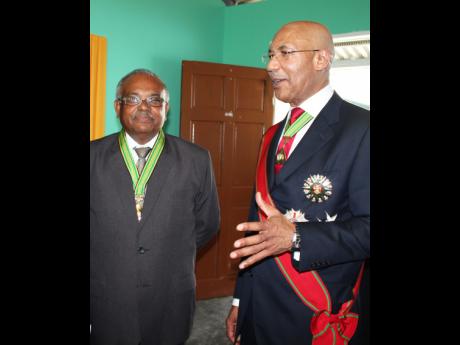 Johnson was conferred with the Order of Distinction, commander class, during the ceremony, which was attended by Minister without Portfolio in the Ministry of Transport, Works and Housing Dr Morais Guy, Opposition Senator Robert Montague, Chief Justice Zaila McCalla, and dozens of justices of the peace.

After presenting the custos with The Grand Commission and the Magistrates' Roll for St Mary, Sir Patrick said: "The custos rotulorum is appointed by the governor general on the advice of the prime minister and becomes a non-partisan representative in the parish. He or she engages in activities that promote the rule of law, public order, and civic pride, and is also responsible for ensuring there are sufficient JPs to give leadership and support in local communities and to preside over meetings of the petty sessions court."

Johnson, who was appointed to the post two months ago after the death of Jeffrey McKitty, responded with an impassioned acceptance speech calling for a return to traditional family values.

The educator, who spent two decades developing St Mary High School into a leading academic institution, said: "Thank you for the confidence entrusted in me with this responsibility on this special day in my journey on Earth. I will do my best to fulfil our dreams for a better tomorrow for this, our beloved country."