Jolyn excels despite the odds 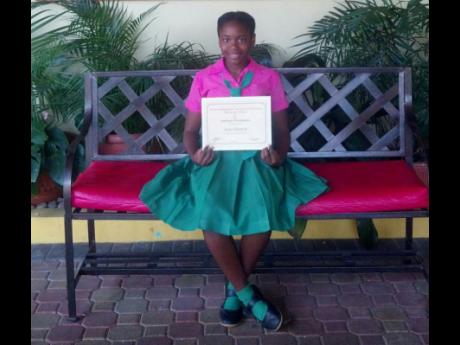 Contributed
Jolyn Edwards was a student at the Campbell’s Castle Preparatory School in rural Manchester and is now heading to Bishop Gibson High School, with an average of just under 90 per cent average.

Unlike many others who have been accustomed to academic excellence from as early as infant school, Jolyn Edwards had a slow start. Not being able to read, she did not truly flourish until grade three.

However, Jolyn's unrelenting spirit allowed her to thrive amid the odds.

Having been cared for by her grandmother for eight years in Kingston, Jolyn's first struggle came about when she had to move to Manchester and adjust to life without certain privileges in a new environment.

"While I was down here studying, I had no choice but to leave Jolyn with her grandmother. So when I was in a better position, I took her here, but it was a very difficult transition. She was not comfortable in the school environment and she cried daily. She felt as though the children didn't like her and so it was taking a toll," said her mother, Anita Forsythe-Simpson.

Having become the sole breadwinner of the household, with a very small salary, the onus was left upon Forsythe-Simpson to ensure the other pressing circumstances did not become a burden for her daughter.

"I had to encourage her daily. I knew of her determination to excel and so I helped her to renew that self-motivation ... . Because she was coming from an area that afforded her some amenities that weren't available down here, I had to help her understand our situation," she added.

"We live close by school so she didn't need bus fare and, as it regards lunch money, there was none. Her breakfast was fruits that she picked from the trees at home and her lunch would be something I made early in the morning or the night before. Ssome days, it was tight, but she didn't let it bother her."

From the student that had a slow start, who was later placed in an environment that took much getting used to, Jolyn became the only female student from her institution to pass for a traditional high school in 10 years.

"I was determined to make my mother and myself proud. I knew I had to work hard, going to bed around 8 p.m. and getting up around 3 a.m. to study. Some mornings, I went to school tired, but I knew God would see me through," said Jolyn.

She added: "Whenever my circumstances would get to me, I kept Phillipians 4:13 in my head: 'I can do all things through Christ who strengthens me.' I understood my situation and, instead of being sad over what I didn't have, I made use of what I had."

Aspiring to become a nurse, Jolyn will be heading to the Bishop Gibson High School with the hope that she will do even better than she did at the primary level.