Kaliese Spencer's family in tears, disappointed, after she failed in Beijing 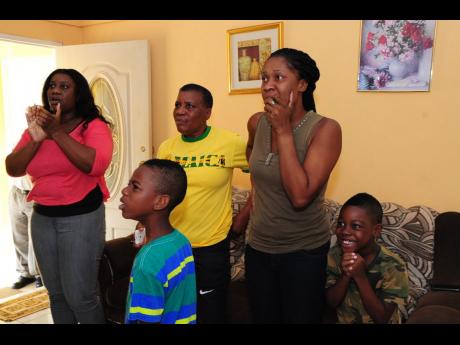 Paul Clarke
Merfelyn Robinson-Spencer (centre) is a picture of anticipation. So, too, are her daughter, Kadisha Spencer (left), and friend, Camille Ambersely, as they watch Kaliese Spencer contest the Women’s 400m hurdles final at the World Championships in Beijing, China. Also in the frame are Kadisha’s son, Dejaun Wright (front); and Hoyita Hall, Camille’s son.

Disappointment stretched across the Atlantic Ocean for Kaliese Spencer's family, as between her mother in Darliston, Westmoreland, and her father living in Toronto, Canada, there were many questions and tears flowing following her last-place finish in the Women's 400m hurdles at the IAAF World Athletics Championships in Beijing, China.

Her mother, Merfelyn Robinson-Spencer, was a picture of composed confidence before the race yesterday morning, even calming the nerves of her other daughter, Kadisha.

The two sat glued to the television, along with close family friend Camille Ambersley, awaiting the starter's gun, much as Kaliese was, but, as the Jamaican 400m hurdles gold-medal prospect left the blocks, gloom was all over their faces.

"From she started I knew something was wrong. This is not Kaliese. It's like she just gave up and lost focus after hitting the first hurdle and it threw her off," a crying Kadisha said, after watching in despair as Kaliese ended the race eighth in a time of 55.47 seconds.

It was the worst possible result for the Spencers, who told The Gleaner that she was in good spirits from the night before and was even hinting at a new personal best.

"We spoke with her last night and she was comfortable and happy about things. She said she was feeling confident and could post a fast time, so to see her lose like this is heartbreaking," said her mother.

"Disappointed, but what to do? It's just another missed opportunity,"Robinson-Spencer said of the former Manning's School track star.

Meanwhile, miles away in Canada, a clearly frustrated Joshua Spencer was gracious in his assessment of the race.

He said via a telephone call that he, too, was anticipating his daugter landing a medal and he was sorely disappointed at her defeat, but said he was sure she would recover.

"Kaliese, I know, is a hard worker, and I am also certain she will bounce back from this loss. She is a fighter and a determined person ... , so she will recover and continue doing well," he said. "She will learn from this and return much stronger and hungrier for success, and we are right behind her giving our support," he added.

It was a case of another missed global individual medal for Spencer, who is third-time unlucky, having come close before, but will still cherish her gold at the 2014 Glasgow Commonwealth Games in Scotland.

Spencer, who entered the race in Beijing as one of the favourites for gold, has never done better than a silver, which she claimed in 2009, and from all reports was looking to finally break the jinx, but it was never to be.

"I cannot begin to think how she must feel. She is going to be so sad," Kadisha said, wiping tears from her eyes. "But I am sure she will overcome this one, too."

Motherhood delayed - Star athletes waiting until they hang up their spikes to become moms
11 medals in Beijing?