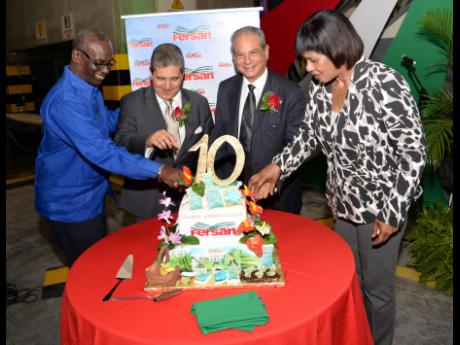 Prime Minister Portia Simpson Miller on Tuesday gave the assurance that her administration is committed to making it easier for manufacturers to export their products, pointing to the continued modernisation and upgrading of the export systems for greater efficiency.

Speaking at the 10th anniversary pinning ceremony hosted by Newport Fersan (Jamaica) at its Wherry Wharf Complex at Newport East, she said improving productivity is not about getting workers and managers to work longer hours, but rather getting them to work smarter.

"It is about building a new, expanded and more prosperous economy on the platforms of creativity and greater efficiency. My administration is undertaking bold policy reforms to increase the productive capacity of our people and economy. These include labour-market reforms, streamlining the system of waivers and tax incentives, upgrading physical infrastructure, and improving education and training," Simpson Miller said.

She commended Newport Fersan for its successful business strategies, which fit into the national effort to increase productivity.

"Your success as a company will greatly assist our national effort to attract more wealth-creating and job-creating investments to Jamaica. It is with this in mind that the Government is placing stronger emphasis on getting our local investors and exporters to lift their productivity levels. We are supporting and encouraging efforts for business expansion [and] reinvestment because we need reinvestment," the prime minister explained.

She also used the occasion to remind farmers of their pivotal role in national development.

"Farming has remained one of the most resilient and dynamic sectors of the Jamaican economy and continues to be among the greatest contributors to economic growth. The Government is banking on the farming sector to provide much of the improved economic growth we are working towards."

The prime minister said in keeping with this, 21 additional agro parks will be commissioned into service over the next three years, bringing the total number to 30. She said creating new markets for the anticipated increase in fresh and processed agricultural produce was part of the regional strategy to strengthen economic integration with non-traditional trading partners.

"CARICOM has, over the years, signed trade agreements with several countries in the region. These include the Dominican Republic, Venezuela, Columbia, Cuba, and Costa Rico. My administration is serious about export because we must increase export trade. If we don't export more, if we [are] not trading more, if we [are] not selling more, then we will not be able to increase our export trade."

Eight workers were honoured for 10 years of service to the company, which is the largest local manufacturer of fertiliser.