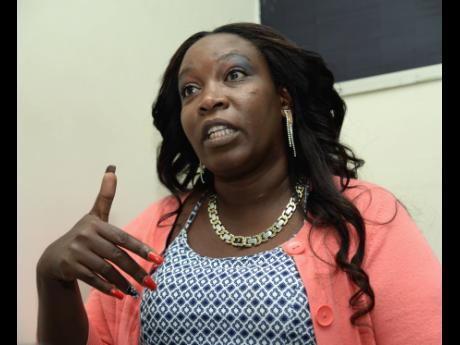 File
Keisha Hayles: It is difficult to balance being a principal and a teacher at the same time. It takes time management and long hours.

Keisha Hayles' passion for teaching exudes effortlessly. Her first teaching assignment was at Red Hills Primary, where she had gone to fill in for a four-month period.

So effective was Hayles at her job that the principal refused to let her go. Four months turned into 10 years.

Ready for a new challenge, Hayles applied to be principal at Padmore Primary, and went with a determination to rescue a school that was on the brink of closure.

Playing the role of both principal and grade six teacher, Hayles has led the school to a well-chronicled story of success.

Six Achievement Test (GSAT), 16 students secured top scores, with one girl gaining a 99 per cent average, which saw her secure a coveted space at Campion College.

"It is difficult to balance being a principal and a teacher at the same time. It takes time management and long hours," she told The Gleaner.

For Hayles, the success of her students at Padmore in the GSAT is a high point of her teaching career.

"Padmore is my greatest GSAT success ... because I love to take the children that everybody says are not going to make it and turn them around to be successful," she said.

Now that Padmore Primary has been catapulted into the national spotlight, Hayles wants the school to have more resources so that the success of the students can be maintained.

"The most critical need right now is to get a new block because we need a staffroom, a resource room, a sick bay, a library, and some additional classroom space. The bathrooms are inadequate, and the teachers practically don't have a bathroom and have be sharing with the children, so I would like the Jamaica Social Investment Fund and Culture, Health, Arts, Sports and Education Fund to come in and help us put up a block that would solve a lot of our problems," she argued.

Despite the difficulties associated with her dual roles, Hayles has no intention of leaving the classroom.

"I always tell people that I don't drink and I don't smoke, so if I have a problem or I feel stressed, I just teach. Teaching is my therapy. Everybody have them likkle habit. Teaching is mine; that is my drug," she said.

"It's all about training young minds and it comes back to my upbringing. I had some good teachers. If it were not for them, I would not be who I am, so I think it's a noble profession, where I can train young minds and I can impact somebody's life. So even kids whom I taught 10 years ago, I still keep in contact with them to say, 'Make sure I see the report every year', to keep them on track ... . So even though they graduate, I am still in their life," she added.

According to Hayles, one of

the factors that contribute to her effectiveness in the classroom is her training in psychology and politics, areas in which she holds separate degrees from the University of the West Indies.

"God was leading ... because I applied for education, but that programme was full, so I had to go to the social sciences," she explained.

According to Hayles, her training in psychology and politics helps her to understand the social issues that her students face.

"I know how to deal with a mother who wants to give up because the father is not there. Sometimes I go to the house and say, 'I will take the children for two days.' Kids are always at my house ... . One time, I had 27 kids at my house ... . Once they are having problems at home, I go and take them because as a teacher, you have to have a connection with each child so you can know what is going on with them," she said.

Hayles argued that a teacher has to do some amount of social work if they are to really be impactful.

"All of that is in everything you know. No [matter] how good you are as teacher, if the child is having problems at home, they are not going to learn, so you have to take it on yourself to be that glue, that change agent ... . You have to call in the mother and go find the father ... . Teaching is not just going on the chalkboard. It's about getting to know the child inside out [so] you can predict their behaviour ... . Everything with them becomes your business. You have to be everything. Teaching is all occupations because the child knows if the teacher cares for them or not,"she added.