Wage deal inked between teachers and the Government 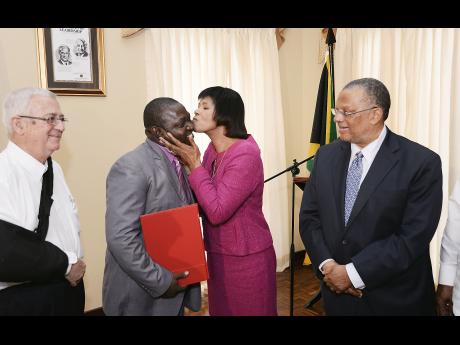 Jermaine Barnaby
Prime Minister Portia Simpson Miller plants a kiss on the cheek of Norman Allen, president of the Jamaica Teachers' Association (JTA) after she handed him a copy of the wage agreement that was signed between the Government and the JTA at Banquet Hall, Jamaica House, yesterday. Looking on from left are Minister of Education, Ronald Thwaites and Minister of Finance and Planning, Dr Peter Phillips.

Notwithstanding, the Portia Simpson Miller-led administration was warned that educators were in no mood to countenance any infringement of the agreement over the next two years.

The warning from newly installed president of the JTA, Norman Allen, elicited reassurances from Prime Minister Simpson Miller as well as Finance and Planning Minister Dr Peter Phillips and his parliamentary colleague in the ministry, Horace Dalley.

Listing some of the benefits to teachers, Simpson Miller said: "I am naming them to ensure that Minister Dalley remembers the commitment to the teachers ... . I do not like to give a commitment and [I am] not able to honour it," she asserted.

Simpson Miller noted that five meetings were held between February and July this year.

She said although there were some challenging moments, the parties have arrived at an agreement that allows for a four per cent increase in year one, and three per cent in year two.

Phillips said he, along with Education Minister Ronald Thwaites, would seek to ensure full implementation of the agreement.

Earlier, Allen said: "It is my hope that the heads of agreement will be honoured to the letter, because any variation will only serve to frustrate and stymie the efforts of our colleagues."

For his part, Dalley said: "There are some things in the agreement that we intend to fulfil to the last letter ... . We believe the teachers deserve more."

Dalley characterised the negotiation period as very difficult and time-consuming, requiring a lot of patience, "but it was always one that we negotiated in good faith, and once we agree, we fulfil our obligations ... . Anything we agree to with our workers, we intend to fulfil".

Deputy Financial Secretary Wayne Jones noted that the agreement has a lifespan of April 1, 2015 to March 2017 and has its own peculiarities and significance.

"Not least among them is the fact that we are signing an agreement that effectively ends what is commonly called the wage freeze, but it doesn't end the period of restraint as we try to make our way out of the challenges that the economy faces," he said.