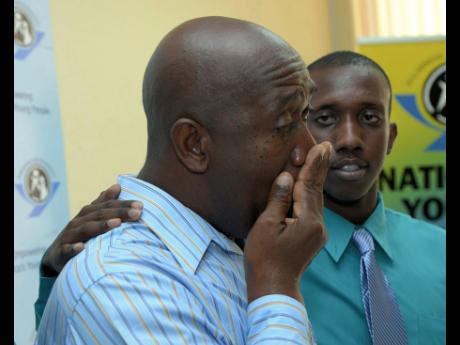 Ian Allen
A tearful Lloyd Patterson, is consoled by his son Kevin, at the closing ceremony of the National Youth Service's Empowerment Programme, held at the New Kingston Shopping Centre yesterday.

Lloyd Patterson struggled to hold back the tears. His son, Kevin, had earlier stepped up to the podium to offer prayers. Kevin suffers from mild intellectual disability and never uttered his first words until he was seven years old.

"To sit down and hear his son speaking in front of other people, he was in awe," said Chairperson of the National Youth Service (NYS) Maureen Webber.

Children with intellectual disability have limitations in mental functioning, including communication. They tend to learn and develop more slowly than other children.

Kevin participated in the NYS Empowerment Programme, which is a six-month engagement for young persons with mild intellectual disabilities. The programme consisted of a

Some 20 young persons with disabilities graduated from the NYS Empowerment Programme in Kingston yesterday.

"One of the participants said they thanked NYS for showing them their ability in their disability," Webber said, while adding, "that is what the programme is about".