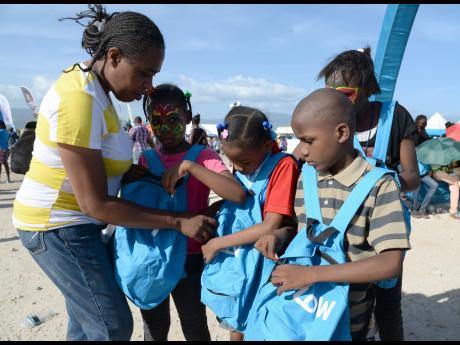 Jermaine Barnaby
Janet Woodfine was eager to look into the bags her four children got at the 2015 Flow Skool Aid at Jam World in Portmore, St Catherine yesterday.

For many patrons, the back-to-school assistance provided by FLOW Skool Aid has made the world of difference given the harsh economic conditions that many Jamaicans face.

For Janet Woodfine, who took her four children to the Jam World Entertainment Centre in Portmore, St Catherine, for free medical check-ups and school supplies, the assistance has lessened her burden as it relates to back-to-school expenses.

"Apart from the sun and the dust, the event is really great," Woodfine said.

"It take off some pressure because we got some things from FLOW ... . We got school books; we got pencils and water bottles," she told The Gleaner as her children waited in line to collect school bags.

Rohan Landel was there, too, and he wanted his son to get a taste of the excitement associated with the event.

"I wanted him to have a different experience, you know. This is a new environment for him, so I brought him out to meet other children and to have fun in the amusement park," Landel said.

His son, Lisandro, was also provided with school materials from FLOW and benefited from medical, optical, and dental treatment, along with scores of other children.

The new telecommunications brand, FLOW, was unveiled in front of a crowd of nearly 30,000 patrons. Cable and Wireless Communication rebranded its LIME product to FLOW following the merger of CWC and Columbus International.