Give more than lip service to kidney disease fight 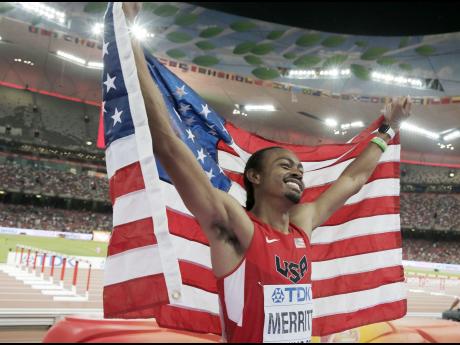 AP
United States’ Aries Merritt celebrates getting the bronze in the men’s 110m hurdles final at the World Athletics Championships.

This is the word from nephrologist Dr Lileth Johnson-Whittaker to the Government.

Johnson-Whittaker, who is founder and chief executive officer of Sunshine Dialysis Centre, was reacting to the athletic feat of Aries Merritt, the United States hurdler who won a bronze medal in the 110 metres hurdles at the World Championships in Beijing, China, on Friday.

The stunning accomplishment came days before he is scheduled to have a kidney transplant.

Merritt, who suffers from kidney disease, now serves as a poster child for advocates such as Johnson-Whittaker, who wants the Government to do more for kidney disease patients.

Doctors told Merritt his kidneys were operating at less than 15 percent and he would need to retire.

"It mentally destroyed me," Merritt said.

Kidney disease is the ninth leading cause of death in the United States.

She said kidney disease is very prevalent in Jamaica, indicating that "it really is picking us off one by one".

"We need to do something about it. We need to develop a coherent government policy as to how kidney disease is managed," she said.

"We need policies - not just people giving speeches - and policies, which are developed in a coherent way with all the stakeholders," added Johnson-Whittaker.

The former chairman of the Department of Medicine at the Kingston Public Hospital argues that the dialysis treatment provided by the Government is insufficient.

Dr Fenton Ferguson, Jamaica's minister of health, said Jamaica is moving to develop a national transplant policy as part of efforts to tackle the prevalence of renal disease.

Johnson-Whittaker said that while she welcomes the announcement that the Government is to develop a kidney transplant policy, she wants the policy to be developed in a collaborative manner.

"We applaud all efforts to improve transplantation rates ... . I trust the minister knows that we were one of the first developing countries to perform transplants ... . I am sure he understands the collaborative nature that is required to bring a viable transplant programme into being. It is not something that one just says, but all the infrastructure has to be put in place to make such a programme viable, and it is not cheap," she said.

Ferguson has said that the cost for dialysis runs as high as $1.5 million per patient annually, "and that is an extreme burden".