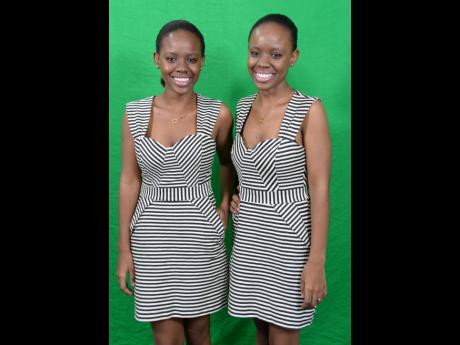 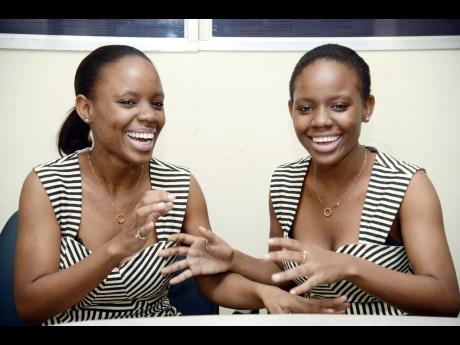 Jermaine Barnaby
Yanique Dixon (left) and her twin sister, Monique, both of Holy Childhood High School in St Andrew, who copped 17 ones and one two between them in this year’s Caribbean Secondary Education Certificate examinations, talk about their success at The Gleaner Company’s offices last Wednesday.
1
2

Monique and Yanique Dixon are almost indistinguishable. They mirror each other in ways that identical twins normally do. They finish each other's sentences, like the same things, and it so happens that they received identical grades in all but one subject for the Caribbean Secondary Education Certificate (CSEC) exams this year.

The twins, who attend Holy Childhood High School, told The Gleaner that they have a mutual love for accounting-related subjects, and signed up to sit the same subjects. Monique gained nine ones with straight A profiles, while Yanique got eight ones and a two.

"Yes, sir," they both chimed, when asked if they had prepared for the exams together.

"It wasn't easy at all. We studied every night, sleepless nights. We went to bed late and woke up early, like 3 o'clock in the mornings, and try (sic) to get what we didn't get the day before," Monique explained.

When asked why they sat the same subjects, the response, again, came in unison.

"Because we like the same subjects," they said with a burst of laughter.

The explanation of how the choice of subjects aligns with their desired career paths came from Monique, who seems to be the more assertive of the two.

"We don't really want to do the same things, but they are accounting based; we both have a lot of career choices," she told The Gleaner.

Monique's top three career choices include being an actuary, economist or soldier. Yanique, on the other hand, has hopes of becoming an accountant, financial auditor or soldier.

The third and fourth of five children, Monique and Yanique reside in the inner-city community of Drewsland, where their father, who is a security guard, is the sole breadwinner for the family. Being acutely aware of the personal and financial sacrifices their father has made in order to keep them in school and provide for them, the twins are adamant about the prospects of making a better life for themselves and their family.

"Our family is very supportive; they make sure we have everything we need, especially Daddy. We have a little baby brother, he is only five months now, so you know it is extremely hard ... we make sure we don't have a lot of needs so he can have what he wants," Monique explained.

The twins' tendency to complete each other's sentences became less prominent when the conversation became more focused on the sacrifices they have had to make. Here, Monique took the lead, volunteering a particular situation that brought her to tears as she shared it with The Gleaner.

"Sometimes when we are going to school, we only have like $200, because our Daddy doesn't have much to give. So we make juice and carry to school and Mommy buys snacks. We make sure that serves and we carry that to school because, you know, we have to go to school.

"We just let the $200 stay so we can top up our cards (Jamaica Urban Transit Company bus cards). That is one sacrifice we make and we just have it in mind, because we know our parents don't have. We really want to make them proud and we did make them proud, because when they heard our results, everyone cried ... Daddy cried and Mommy cried."

While the twins feel some amount of pressure from the expectations for them repeat their excellent performance when they go to sixth form, they indicated that this provides a motivating force for them.

Monique said, "We do feel pressured, but it's really nothing, because we have our family, especially our father and our mother. Seeing they didn't get the education that we got, that just motivates us even more. Just how hard my Daddy is working especially, he always has to beg shifts every night so that ... ."

She paused mid-sentence and Yanique chipped in, completing her sister's sentence with: "he can pay for our school fees."

"Daddy is just pushing, pushing; he hardly gets sleep at nights because if he goes to work Sunday evening, he doesn't come home until Monday night ... so that just push (sic) us to achieve more."

The twins have a shared dream of building their father a house of his own so that he no longer has to pay rent.

"My Daddy, he had been paying rent from his eye was at his knee, so just to see him have that house for himself so he can live rent free ... we both have the same goal to give him his dream house," Monique said.