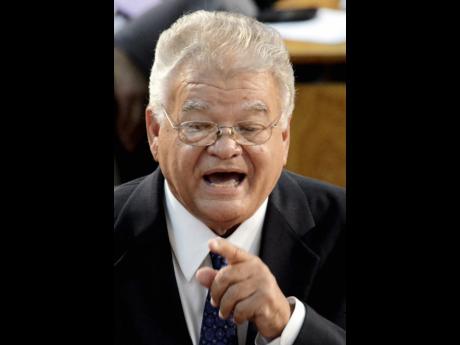 Speaking ahead of an election planning meeting at the JLP's Belmont Road headquarters, Samuda told The Gleaner that, but for financing, all was in place with his party.

"All the structures that will assure us an election victory are in place," said Samuda, who has been approached by JLP leader Andrew Holness to lead the party on the campaign. "We are gently working on the ground," he added.

With Simpson Miller declaring that the ruling People's National Party was ready for an election, Samuda said he dared her to "stop jumping up and down and call the election.

The veteran politician, who, as campaign manager, led the JLP to its first electoral victory in 18 years back in 2007, said campaign work on the ground was proceeding smoothly.

"We are very green in these constituencies with only spotting of drought, so there is no real cause for concern," he asserted.

But despite the work on the ground, Samuda expressed unease that the party was strapped for cash.

"Financing remains our biggest challenge at this time and we have to try find a way to overcome this, but we are good to go and are ready for the challenge in all 63 constituencies." he said.

Last week, Holness expressed optimism that corporate donors would pull through for the JLP.

Samuda hinted that the JLP would be banking on what he said was the hardships being experienced by Jamaicans under the arrangement agreed by the Government with the International Monetary Fund (IMF).

"The JLP is absolutely confident that the level of pain being experienced by the average Jamaican at all levels under this IMF agreement makes it extremely difficulty for a second term for the Government," he said.

Added Samuda: "The JLP has repeatedly enunciated its approach that would create opportunities for the masses of the country and we would not just willingly accept onerous elements of the agreement."

He suggested that while it was expected that some constraints would have resulted from the agreement, the JLP was convinced that Finance Minister Dr Peter Phillips has made some poor decisions. "He has agreed to a constriction of factors which constitute the opportunities for growth," said Samuda.

He charged that the lack of fiscal space had eroded economic incentives for key growth sectors such as agriculture, tourism and manufacturing.