Buy them out! Chuck wants poorer Jamaicans removed from lands with rich potential 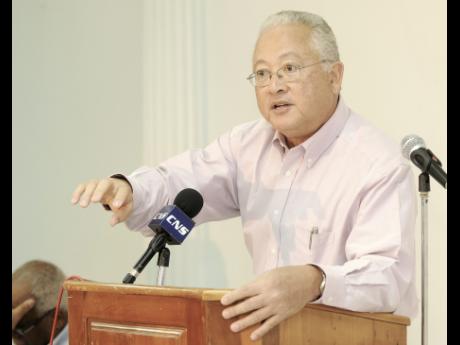 The Simpson Miller Government is being urged to consider leading a process of renewal in Jamaica's inner cities by purchasing, on a large scale, property owned by poor people and selling them to developers to build housing solutions for middle-class and affluent people.

Delroy Chuck, the member of parliament (MP) for North East St Andrew, a constituency of mainly middle- to upper-class residents interspersed with inner-city areas, said the State should lead the way in removing the less affluent persons, thus paving the way for development.

Speaking in the first-ever Constituency Debate in the House of Representatives yesterday, Chuck complained that developers are "coming in communities and changing the character of the neighbourhood".

The new debate is being used by MPs to, among other things, suggest ways in which the character of their constituencies can be improved.

"It might not be a bad idea for [the] Government to declare certain depressed areas, especially in Kingston and St Andrew, to be development areas. Take a five acre, buy out the people and let private developers bid in order to put in some housing developments," Chuck said.

His suggestion was met with cold rejection from government member Luther Buchanan, who asked what would happen to the people who once occupied the lands in the depressed areas.

"You buy them out and they go elsewhere," Chuck said.

He continued: "What is happening now is that the private developer is able to buy either one or two acres, and they are putting up apartments and town houses and this ad hoc development is creating havoc in many communities, especially in North East St Andrew."

Julian Robinson, whose South East St Andrew constituency was named as being one in need of gentrification, told The Gleaner last night that he was in support of the position advanced by Chuck.

Chuck had pointed to communities like Vineyard Town in Robinson's constituency as an area which could benefit from redevelopment. He said those areas had "seen their best" and that one way to restore them was "to put in nice housing development".

Supporting the call, Robinson said Vineyard Town and Woodford Park, for example, had seen their housing stock deteriorate because many residents cannot afford to maintain them.

"You could look at those places and look at doing development in some of those areas. I do think it is something we should look at," Robinson said.

Chuck also used the debate to call for an end to handout politics.

"We have to explain to our people that you have a personal responsibility to help yourself," Chuck said.

"They feel that the State must take them and support them from the cradle to the grave. It can't work," Chuck added.