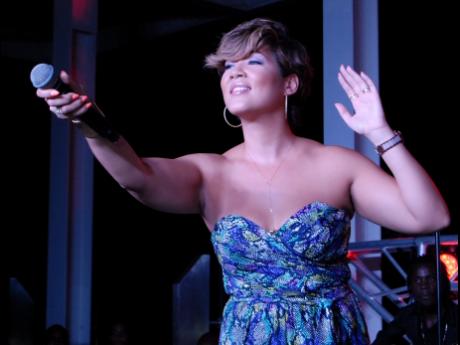 Caught-up in a dogfight to retain its hold on power in the twin-island republic of Trinidad and Tobago, the People's Partnership has turned to Jamaican songbird Tessanne Chin to help pull out a bumper crowd for its final mass rally before Monday's general elections.

The Kamla Persad-Bissessar-led coalition will be staging its final pre-election rally and concert today at the Aranguez Savannah in the east of Trinidad, and newspaper advertisements and billboards are advertising Chin, the winner of season five of the United States talent show, The Voice, as the featured performer.

Persad-Bissessar and other top-ranking officials of the two major parties in the governing coalition the United National Congress and the Congress of the People - are also scheduled to address the rally.

Metres away from where the People's Partnership supporters will gather, the man who wants to take over as prime minister, Dr Keith Rowley, will be leading his People's National Movement into its final rally at the Eddie Hart Grounds.

No major international artiste has been advertised for this rally, but with a reggae-flavoured campaign song, Rowley is also expected to turn up the music during what has been dubbed 'The Great Red Rally'.

Opinion polls are predicting a close

contest, with political analyst Derek Ramsamooj telling the Trinidad Express newspaper that new marginal constituencies will determine which of the parties will capture the majority of the 41 seats up for grabs.

A third force is also coming into play, with Trinidadians appearing split over a call by former president of the Senate Timothy Hamel-Smith for voters to deliberately spoil their ballots.

Hamel-Smith is spearheading a 'none of the above' (NOTA) campaign, which seems to be gaining traction despite calls from Trinidad's Election and Boundaries Commission for voters to turn out and vote.

Politicians on both sides of the divide have also urged persons to reject the NOTA call.

Trinidadians go to the polls on Monday, with preliminary results expected to be released by 9 p.m. local time.