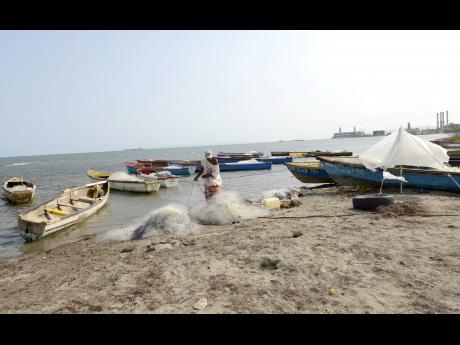 A fisherman does maintenancce on his net on the beach at Old Harbour Bay. 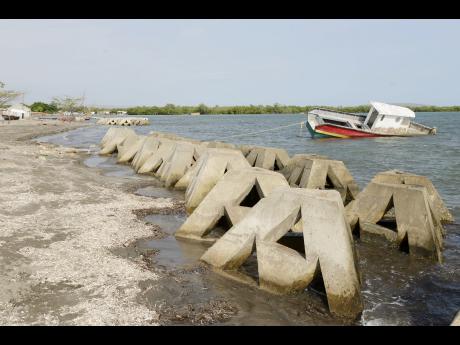 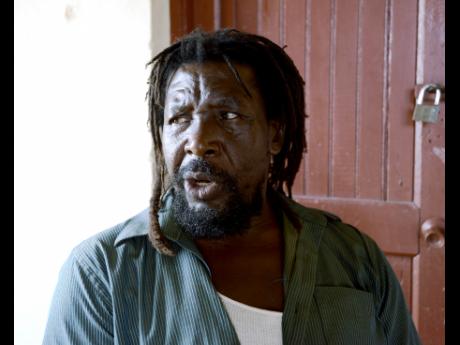 "The economy has changed so much. The cost of living, the cost of equipment to go out to sea have gone up," McDonald said.

He also pointed out that "we do not have enough fish" for all the fisherfolk.

Despite this, though, McDonald said people are not giving up fishing because "they see no alternatives".

"That is why I propose among the fishermen and children of fishermen, we can identify those who can be equipped with alternative, transferable skills, in recognition of the changing environment. I will always be an advocate for that, because I believe in education," McDonald said.

A member of the Old Harbour Bay Fisherman's Co-operative, McDonald insisted: "There needs to be an alternative means of survival for the fisherfolk."

Those who make a living from the sea are not only the persons (overwhelmingly men) who head out from shore in their boats, but also the significant number who provide related services.

McDonald noted that there are people at Old Harbour Bay who make a living from scaling fish. And, of course, there are the fish vendors.

There are a number of factors which affect the fish population, McDonald said, pointing out that the drought has repercussions.

"All rivers go to the sea. Some creatures congregate where the rivers empty - like shrimp, which snapper eat," he said. Therefore, the drought leads to a reduced catch.

Then there is pollution. McDonald said that the debilitating effect of Kingston Harbour is felt off the coast at Old Harbour, with excess algae on the reef. Not to be overlooked is the garbage which is washed down from land or simply tossed into the sea. McDonald said that in 14 fathoms (84 feet) of water fishermen are getting empty bag juice packets in their pots.

"Turtles see it and go after it (mistaking the bags for jellyfish), swallow it and it kills them," McDonald said.

Old Harbour Bay is being severely affected by erosion of the beach, McDonald said, pointing out to The Sunday Gleaner where the sand once extended, as well as how much closer to the sea some dwellings are now.