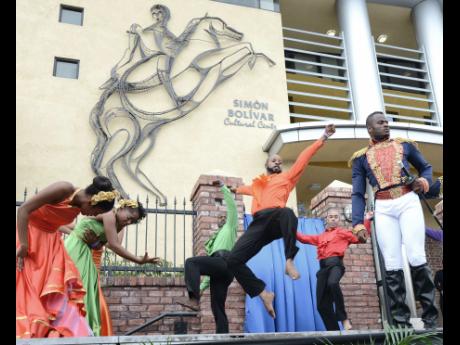 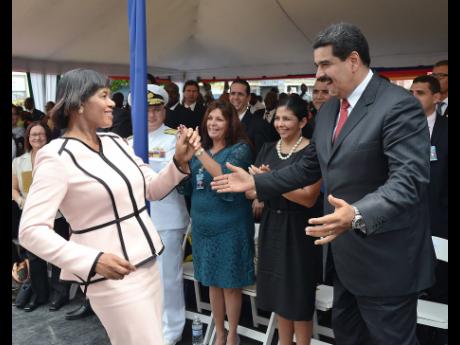 Venezuelan President Nicolas Maduro has appealed to Latin American and Caribbean leaders to stick together, warning that the path to the future is dominated by what he described as "new colonialisms".

At the same time, Maduro wants regional leaders to continue giving support to the PetroCaribe agreement and other "humanitarian" projects initiated by his country.

"In this world of the 21st century, we will only be respected if we remain together, working together," the Venezuelan president said in downtown Kingston yesterday before the official opening of the SimÛn BolÌvar Cultural Centre.

"This is a clamour for the unity of Latin America and the Caribbean ... . It is today that we need to stand up or never," he underscored.

Maduro, who spoke through an interpreter, insisted that it was only through unity that the people of the region would have "the right to true liberty and happiness".

"We need to cherish the path that we have chosen together. We need to beat the intrigues of the powerful of the world that want to prevent the trust and the solidarity that should prevail among all of us," he said.

The cultural centre was funded by the government of Venezuela and constructed by the Urban Development Corporation near the Princess Street home where BolÌvar lived while exiled in Jamaica in 1815.

Prime Minister Portia Simpson Miller said the centre would serve to educate Jamaicans and the people of the wider Caribbean about the life and work of "the great liberator".

"Like our Marcus Garvey, whose philosophy of cultural identity and self-confidence has ignited the world, the ideals and principles of this outstanding freedom fighter of Venezuela will be kept alive in Jamaica," Simpson Miller promised.

The opening of the centre comes 200 years after Bolivar penned his now-famous Jamaica Letter, which would later be regarded as the manifesto of his political doctrine.

Maduro said the Jamaica Letter, described in modern terms, could be considered the road map that took BolÌvar "from defeat to victory [and] from slavery to freedom".

"With BolÌvar, let us say, 'Never again enslave, never again kneeling down'," said the Venezuelan leader, who was in Jamaica for the two-day 10th Anniversary Commemorative Summit of the PetroCaribe agreement.

During the summit, it was announced that PetroCaribe nations have committed to a 10-year plan which will see the Caribbean region being expanded into an economic bloc.

"We have had a summit that is of great relevance. Decisions have been taken based on the specific experience of the PetroCaribe model," Maduro said after the plenary session of the summit on Saturday.

He said that in addition to the current arrangement, which sees up to 60 per cent of the cost of oil purchased from Venezuela being deferred for up to 25 years at an interest rate of one per cent, a new-look PetroCaribe arrangement will focus on the establishment of the region as an economic bloc as well as making it more prepared for natural disasters.

"We have to advance the construction of an economic zone," said Maduro, while adding that it would have to be established by 2025.