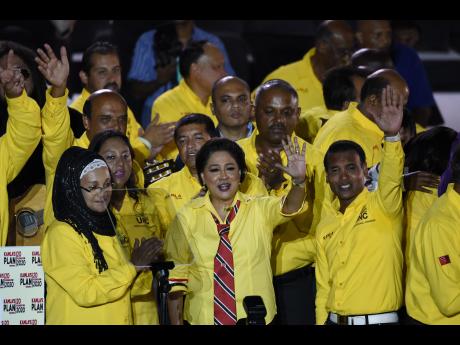 Trinidad Express
Incumbent Prime Minister of Trinidad and Tobago Kamla Persad-Bissessar (centre) thanks the crowd during the final rally ahead of that country's elections to be held today.

The issue of the treatment of Jamaicans and other Caribbean nationals trying to enter Trinidad and Tobago has received no mention on the campaign stage as citizens of the twin-island republic prepare to go to the polls today.

However, the matter is of concern for the man on the street and is often the first thing mentioned once a Jamaican is identified in Port-of-Spain.

"Look how her Government treating you all when you try to come here," declared one taxi driver who voiced his plan to vote out the People's Partnership (PP) led by Prime Minister Kamla Persad-Bissessar, leader of the United National Congress (UNC), the main party in the governing coalition.

"You Jamaicans come here and you work hard in jobs the Trinis don't want and yet them treating you like criminals. That's why Kamla must go," added the taxi driver, underlining one of the themes of the three-monthlong election campaign.

While the regular hot-potato issues such as health, education, job creation and crime have been debated, the campaign has come down to a straight fight between Persad-Bissessar and leader of the main opposition party, Dr Keith Rowley, whose People's National Movement (PNM) is seeking to return to power after five years in the political wilderness.

Lecturer in the Department of Political Science at the University of the West Indies, St Augustine campus, Indira Rampersad, has described the battle as "Kamlamania" - the love for Persad-Bissessar - and "Rowleyphobia" - the fear of Rowley's leadership.

To fight the Kamlamania, the PNM has made its main campaign song "Bye Bye, Kamla", a reggae-flavoured tune which urges Trinidadians to get rid of the woman who has led the country for the past five years. On the flip side, the UNC has argued that R-O-W-L-E-Y spells 'danger' as it urges voters not to allow him to get his hands on power.

But despite the personal campaigns, opinion polls show the election too close to call, with one forecasting the PNM capturing 22 of the 41 seats to take control while another projects the PP getting 21 seats.

However, all the pollsters agree that five marginal seats will determine who leads the government after the votes are counted today.

The campaign peaked last Saturday with mass rallies staged by the major parties attracting thousands of supporters who received last-minute promises from the two leaders. Just over one million voters are registered for today's election across 2,199 polling stations with 132 candidates registered from 17 parties. Thirty-one of the candidates, or fewer than 30 per cent, are women.

The polls close at six this evening, with the preliminary results expected by 8 p.m. Jamaica time.