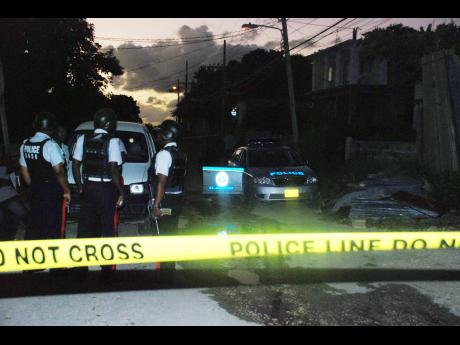 File
Police on a crime scene in Glendevon, St James.

Just under 500 murders have been recorded across rural parishes this year, surpassing the figure reported for the metropolitan areas.

According to the latest Periodic Serious and Violent Crime Review released by the Jamaica Constabulary Force (JCF), 470 murders were reported across the 11 police divisions spread across rural parishes between January 1 and last weekend.

This is a 44 per cent jump when compared with the 326 murders reported in rural parishes over the corresponding period last year. The St James Police Division led the way with 144 reported murders this year, followed by the Clarendon Police with 86.

By contrast, the eight police divisions located in Kingston, St Andrew, and St Catherine recorded 356 murders over the same eight-month period this year, 114 less than were reported across rural parishes. This represents a one per cent decline when compared with the corresponding period last year.

Overall, the statistics show that up to Sunday, a total of 826 murders have been reported this year, a 20 per cent spike when compared with the 686 murders recorded over the corresponding period last year.

At the same time, the JCF figures show that other categories of serious crimes are on the decline. As an example, the data revealed that shootings are down two per cent, robberies declined 10 per cent, break-ins are down 26 per cent, and rapes declined by 24 per cent.