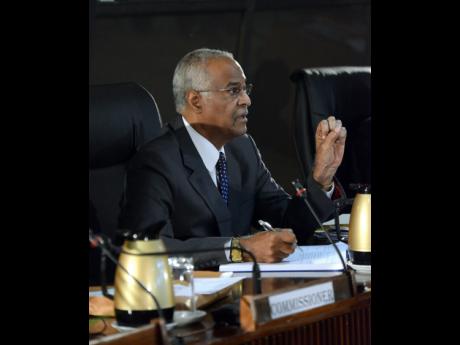 File
Sir David Simmons, chairman of the West Kingston Commission of Enquiry, at the Jamaica Conference Centre in downtown Kingston.

Three Jamaica Defence Force soldiers, who have reportedly come forward with explosive allegations that they saw police personnel kill unarmed civilians in Tivoli Gardens during the May 2010 operations, will be allowed to tell their story before the West Kingston Commission of Enquiry, informed sources have revealed.

That was the ruling of commission chairman Sir David Simmons after a near three-hour closed-door session yesterday with attorneys involved in the hearings being held at the Jamaica Conference Centre in downtown Kingston, a source told The Gleaner.

Following a hint by Simmons on Monday that "an important aspect of the enquiry was about to unfold", law-enforcement insiders revealed yesterday that the three soldiers - who were among the troops who went in search of drug lord Christopher 'Dudus' Coke - have provided witness statements alleging that they saw as many as eight police personnel engage in the killing of unarmed civilians.

According to one source, the statements have been turned over to the three-member commission, triggering yesterday's discussions on how they would be accommodated.

Simmons did not make his ruling public, but sources told The Gleaner that the soldiers would be allowed to give their evidence from an undisclosed location.

"They will give evidence from an undisclosed location via audio link that will be transmitted to the conference centre and there will be some distortion of their voices," one source revealed.

However, it is not clear when they would give evidence.

Debra Martin, one of the attorneys representing the Jamaica Constabulary Force, took issue with media reports about the fresh allegations being made against policemen who were part of the operations.

While refusing to indicate whether she was satisfied with Simmons' ruling, Martin complained that media reports about the contents of witness statements before the commission defeated the purpose of the closed-door session.

Simmons acknowledged on Monday that "documents" have been turned over to the commission and that, following a preliminary examination of the documents, he and fellow commissioners Anthony Harriott and Hazel Harris ordered that the authors be summoned to give oral evidence.

Simmons said then that this would be done next Monday and Tuesday when the schedule would be rearranged to accommodate three witnesses.

Yesterday the commission also heard evidence from another Tivoli Gardens resident that she watched as her house, with all her belongings, went up in flames.

Shannah James recounted that she asked a member of the Jamaica Constabulary Force to call fire fighters to tackle the blaze and was told "is a state of emergency, no fire trucks nah come in here".

The elderly woman also testified that, amid heavy gunfire and the sound of "bombs" over her west Kingston community, she and 14 other residents were forced to seek refuge in a neighbour's home. However, she said they were alerted to smoke in the bathroom and ran outside where they encountered a group of policemen.

"We came out on to the veranda and was crying out for help and some policemen answer and say 'look how long we come a di house an tell oonu fi come out. A dead di whole a oonu fi dead'," James recalled.