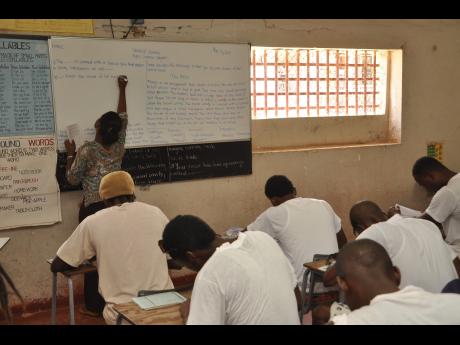 File
Inmates at a local prison take part in classes during a rehabilitation initiative.

There are some things in life which remind us of our common humanity. An interface with Michael Cleary and AndrÈ Ennis, inmates at the Tower Street Correctional facility, is one such event.

Michael and AndrÈ are among 26 inmates at the prison who secured passes in the recent sitting of the Caribbean Secondary Education Certificate (CSEC). Michael gained grade ones in both English and Mathematics while AndrÈ got grade two and three in the respective subjects.

Beyond their CSEC passes, the general demeanour of the two inmates will erode the perceptions that one would have of the men who live behind the stone walls of the prison.

When The Gleaner sat down with the inmates, the impact of their experience with the CSEC exams could immediately be seen.

For Michael, a 31-year-old, who is in prison for robbery with aggravation and attempted murder, sitting the exams forms part of preparation for post-prison life.

"I am here in prison so I am looking forward to going out there, and I want to make a major change so this is one step further to the goal," he told The Gleaner.

Michael has hopes of becoming a journalist and wants to attend university to pursue studies in communication.

"I want to study communications because I like communication. I like the whole media world. I am a part of the radio station that we have here in the prison so I really like the media," he said.

This clarity about what he wants to do with his life after prison has come about because of his new found faith.

Michael converted to Islam through a fellow inmate. He says being a Muslim has transformed his life and that his faith served as a source of strength during his preparation for the CSEC exams.

"I am a Muslim and that is one of the major factors that push me ...; since I became a Muslim it has changed my life totally."

AndrÈ, who is 27, is in prison for murder and says he wants to use his CSEC passes to follow in the footsteps of his father, who is a mechanical engineer.

"I want to go to college to pursue that dream, because my father is a mechanical engineer and I was working with him from I was young so I want to get qualified in that area," he said.

While one would have imagined that preparing for and sitting exams in prison would be a bit of a challenge, AndrÈ and Michael pointed out that their fellow inmates were very supportive, assisting them with studies and observing silence during the time they sat the exams.

Overseer at the Tower Street Correctional Centre Owen Fletcher told The Gleaner that he was impressed with how the men have transformed their lives.

"AndrÈ and Michael are two of our role models, and we are using them to motivate the other prisoners. We plan to expand the CXC programme by adding more subjects and getting more inmates to sit the exams," he said.

The CSEC programme in the prison was introduced by the non-profit, Stand Up for Jamaica; spearheaded by human rights activist,Carla Gullotta.